How The Coronavirus Has Impacted The Markets And Our Look Ahead 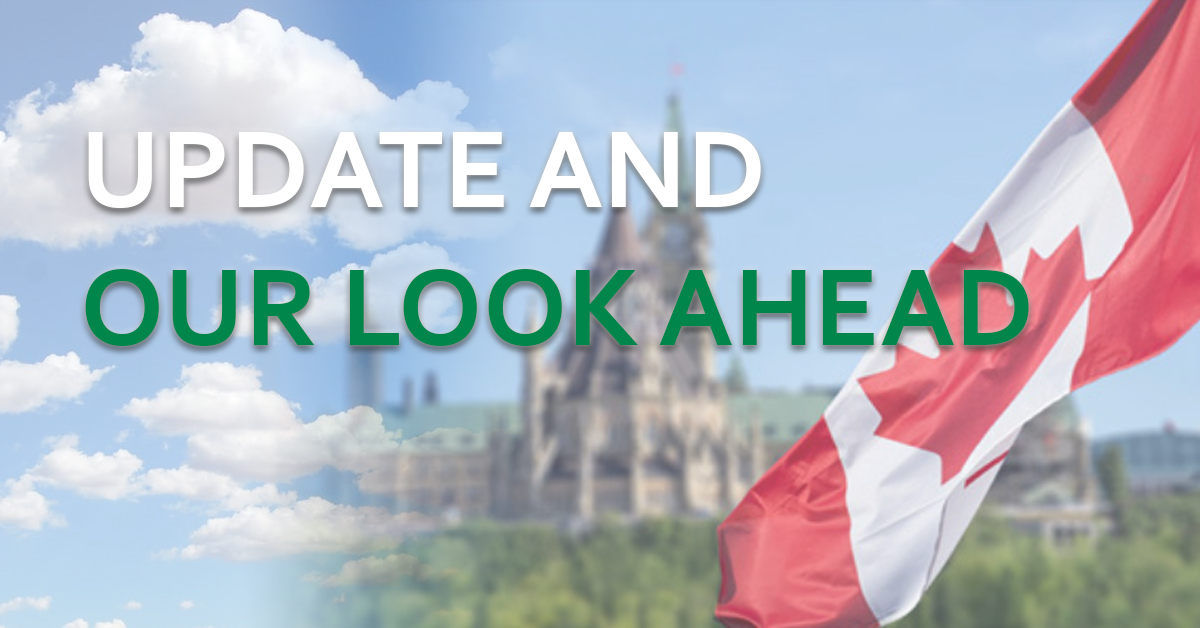 How The Coronavirus Has Impacted The Markets And Our Look Ahead

Marilyn Ferguson[1] lays claim to the following: “Fear is a question… What are you afraid of, and why? Just as the seed of health is in illness, because illness contains information, your fears are a treasure house of self-knowledge if you explore them.”

These quotes provide an important backdrop to what all of us are experiencing daily. We fear what we do not control and what we cannot explain. Dramatic headline powered gyrations in financial markets, escalating infection rates, varying pandemic trajectories and response protocols delivered by a politically biased 24-hour news cycle.

What about the future? How deep is impending recession? How long will it last? What are the long-term implications of the unprecedented fiscal and monetary stimulus? And when will the stock market bottom?

We will begin with insights around the coronavirus track providing a backdrop that will underpin our base case scenario. The bulk of the report will focus on the government’s economic response to the pandemic specifically breaking down aggressive central bank intervention to provide liquidity and government fiscal programs to ensure continuity.

Obviously, we are not epidemiologists, so anything we offer about the trajectory of the coronavirus pandemic is anecdotal insight based on publicly available information.

We believe the news coming from Italy offers a glimpse into the risks associated with worst case scenarios. It is estimated that North America is about two weeks behind Italy in terms of the pandemic outbreak so shortly we will have an understanding as to the effectiveness of North American mitigation efforts. Ideally, we will see a smoothing of the trajectory rather than the vertical explosion that has overwhelmed Italy’s healthcare system.

Interestingly there has been surprising gaps in geographic trajectories. From higher rates of mortality within Italy, to Switzerland’s second highest percentage viral load and Africa’s significantly lower rates of infection.

These differences may provide some insight into what the future holds for North America. For example, Italy has an aging geographic with 23% of its population above the age of 65. That could explain the higher percentage of serious cases.

Some also believe that the abruptness of the pandemic’s vertical ascension was caused by initial misdiagnosis. Not to lay blame but in late January and early February, Italy was at the height of Italy’s annual flu season. Similar symptoms made it easy to dismiss coronavirus as flu.

Switzerland’s total seems out of character given its methodical reputation. It has been said that one can set the time on their watch by the schedule of Swiss trains. However, Switzerland is a tourism mecca where people come from all corners of the world to enjoy the Swiss scenery and magnificent ski facilities.

But more importantly, Switzerland shares an open border with Northern Italy, the epicenter of the pandemic. In fact, there are 68,000 northern Italian residents who cross the Swiss border to work daily and return home in the evening.

Switzerland was reticent to shut its borders given its predisposition as a neutral observer. Of course, that has changed with the spike in cases. The country has taken steps to close all its borders for the foreseeable future.

Africa’s low infection rate provides circumstantial evidence that anti-viral and malaria drugs being made available to New York State may reap therapeutic benefits. Many within Africa use the malaria drug to combat insect transmission and there is a point of view that it may have helped to tamp down the coronavirus infection rate on the African continent. 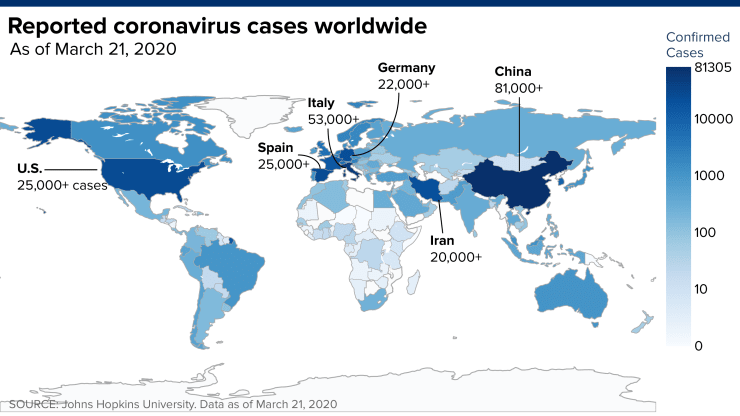 We are seeing an exponential ramp up in Canada’s cumulative infection rate (1365 cases at time of writing, see figure 1). At first glance the totals can be disheartening but it is important to recognize that the cumulative totals are not the baseline typically used to adjust mitigation protocols. 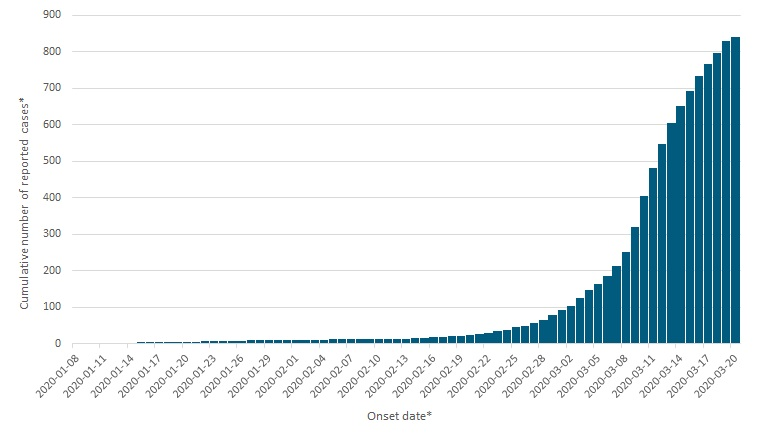 Health officials seem to attach more weight to the daily number of new cases. The daily new cases are added to the cumulative total (i.e. Figure 1) that accounts for those currently infected, those who have recovered and fatalities. Figure 2 examines the daily new case load which peaked at 84 new cases on March 10th and has for the most part, been on a downtrend since then. 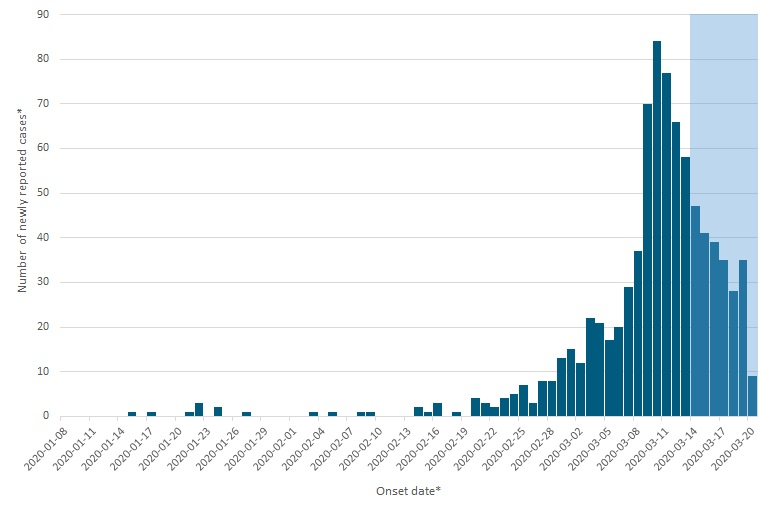 The US system is not ideal for mobilizing multiple fronts against a global pandemic. The Federal response was slow out of the gate although it has been ramping up. As testing increases the number of cases in the US mounts. It is now the world’s third largest case load.

Despite the slow initial response, the US is now clearly engaged. There have been a number of positive steps; closing US / Canada / Mexico borders, “shelter at home” orders issued in six States (at the time of writing), social distancing, shuttering events that draw more than 10 people and restricting all but essential travel.

While there was no web-based presentation of the daily new case counts the following map highlights recent case counts across each State. You can also follow coronavirus with live updates using the interactive Johns Hopkins Coronavirus Dashboard [2]. 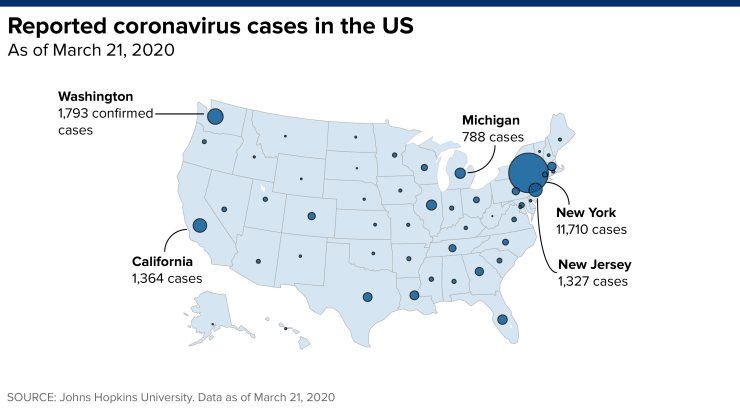 If we can leave you with one thing, it’s to make certain that fear does not grip you to a point where you make unproductive decisions. Something you might consider; stop watching CNN and Fox News. CNN is too negative Fox is overly optimistic. Both are being driven by a political agenda which means reality likely lies somewhere in between.

On Sunday evening the US Senate had refused to pass a procedural bill leading up to the US $2 trillion package aimed at ensuring the survival of small businesses and their employees. The stalemate came hours after Democratic leaders warned that the bill was not to their liking because they said it did too much to bail out companies and not enough to help workers. Stock futures cratered Sunday night as the two parties failed to agree on the terms of the package. By the next morning stock futures had recovered and were pointing to a higher open. Since then the markets have been whipsawed depending on what headline flows from the Senate.

I have no doubt that the Senate will pass something close to what the Administration wants. US businesses are in survival mode and they need this government lifeline. The numbers are staggering. The corporate backstop within the fiscal package is essentially a series of loan guarantees that will eventually be paid back.

Chairman Powell, of the US Federal Reserve, announced on Monday morning a series of measures aimed at helping markets function more efficiently amid the coronavirus crisis. Among the initiatives is a commitment to continue its asset purchasing program “in the amounts needed to support smooth market functioning and effective transmission of monetary policy to broader financial conditions and the economy.”

These asset purchases represent a new chapter in the Fed’s “money printing.” The Fed has effectively committed to expanding its balance sheet as necessary, rather than expansion with a pre-defined limit.

The Fed will also, for the first time, buy corporate bonds and investment-grade securities in primary and secondary markets and through exchange-traded funds. The move is designed to quell concerns in a space that has seen considerable turmoil since the crisis intensified. It will also ease the cost of borrowing for corporations who need new capital.

Don’t be surprised that as a next step, governments begin taking positions in the common equity of too-big-to-fail companies (i.e. Boeing Inc.) to offset the barrage of sell orders that have hit stocks hard.

What is important to understand is the size and scale of these actions. The monetary and fiscal packages represent nearly 20% of US GDP. Even if the US economy contracts by 24% in the second quarter (Goldman Sachs worst case scenario) it is hard to imagine a protracted recession once the virus subsides. We think our clients are better served if we do not fight the Fed and maintain quality positions with reasonable hedges.

The longer-term implications of these measures are more difficult to quantify. The main risk when printing money is inflation. The cause and effect relationship between too many dollars chasing too few goods. However, central banks have more latitude when inflation is moot. That is not to say inflation cannot rise in the future, but that should only occur if companies are not able to meet increased demand by ramping up production.

Given global supply chains and just in time inventory models we think corporations can quickly ramp up supply without raising prices. Moreover, this new money if spent on consumption, will provide tax revenue at the equilibrium point of supply and demand. Think about it this way; tax revenue is generated by the velocity of money not necessarily the amount of capital in circulation. Each time a transaction occurs it leads to another transaction and so on. Each of those transactions spins off some form of tax.

Another factor is the greenback’s role as the world’s reserve currency. Most goods and services are priced in US dollars. Oil being a case in point. As the world’s reserve currency and currency of last resort, any increase in new money should be absorbed across the globe. Mind you, chasing US dollars will negatively impact other currencies as we have seen recently with the Canadian dollar.

Coming full circle, we are managing client assets based on a view that equities will find support around the 2000 level on the S&P 500 Composite Index after having broken significant support at 2350 and 2300. The 2000 level is where the S&P 500 was trading in early 2016. 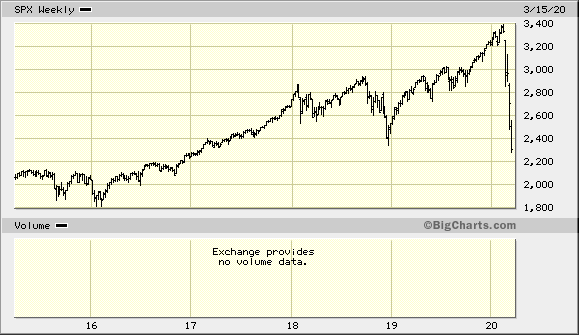 As you may imagine the CBOE Volatility Index (symbol VIX) has spiked during the market’s turmoil. The VIX is the consummate fear gauge and rises when panic ensues. At points during this crisis the VIX reached levels not seen since the financial crisis.

More recently, we have seen some contraction in the VIX (see Figure 4). Of course, it could spike again, but given where we are on the S&P 500 index, it may be telling us that much of the selling is behind us. 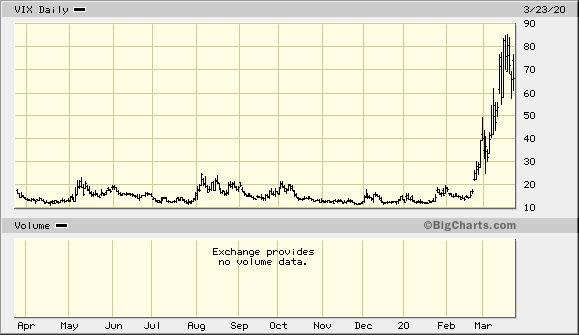 What we do know from heightened levels on the VIX, is that option premiums have risen dramatically. We sell options to collect the premium which is used to cover the income requirements of our retired clients. We can that more easily in the current environment. To that end, we have also taken steps to move more of our client assets into our proprietary pools so that we can take timely actions to manage volatility.

If I can leave you with this; do not lose sight that we are dealing with a serious illness that has a life expectancy. At some point the virus will not find any more hosts or there will be an effective vaccine, and economic activity will return. The recovery may follow a “V” shaped pattern that leads to a dramatic snap back in stock prices, or a it could be more methodical over the next four quarters resulting in a more tempered uptrend in stock values. Either way, life will improve.

[1] Marilyn Ferguson (April 5, 1938 in Grand Junction, Colorado – October 19, 2008) was an American author, editor and public speaker, best known for her 1980 book The Aquarian Conspiracy and its affiliation with the New Age Movement in popular culture.