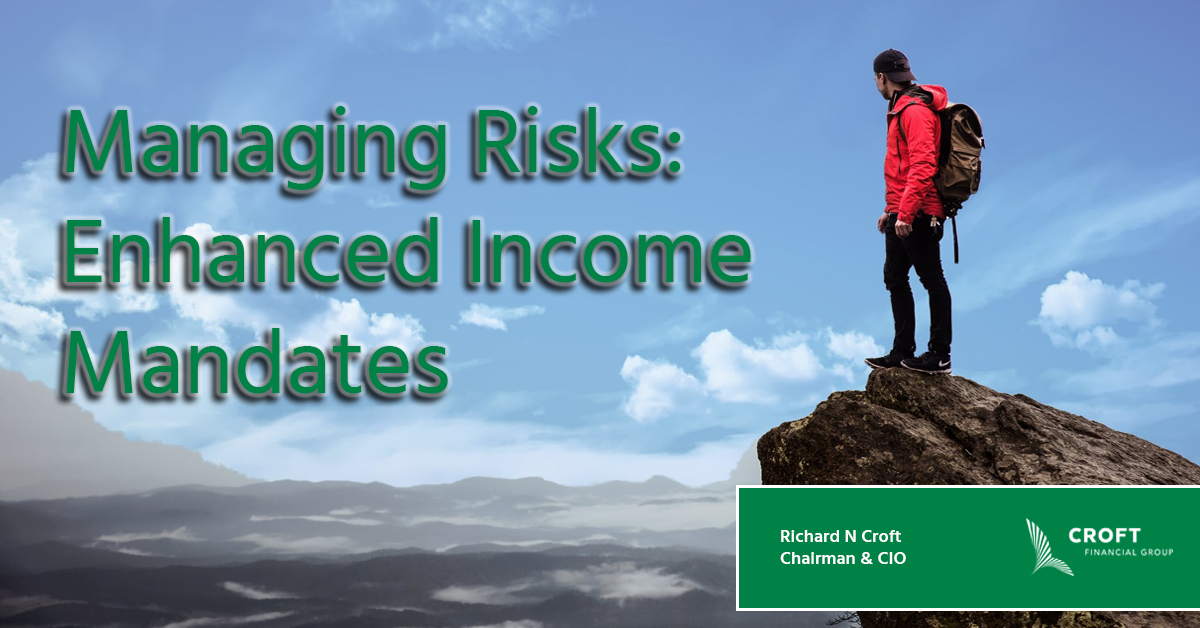 Professional money managers look at investments in terms of risk versus return. Hence the concept of risk-adjusted return, which is the central theme underpinning portfolio management. However, that is very different from the way most individuals look at investments. Investors understand return because it is quantifiable. It is simple math. Risk not so much!

While risk is also quantifiable, being measured as the variability of returns, it is also directly impacted by time (i.e. the length of time you hold an investment) and not always grounded in logic. When focusing on an investment’s return over a long period, short term aberrations appear like blips. In the heat of the moment, those blips seem catastrophic and often drive decisions based on sentiment. Notably fear and greed!

An income portfolio is especially relevant to this discussion. It is generally viewed as portfolio of conservative investments, typically over-weighted in fixed income securities (i.e. bonds and preferred shares) with a limited allocation to equities.

The twin requirements of risk versus return are well defined. The former requires a needs analysis to ascertain the investor’s required rate of return. How much income is required to meet fixed expenses and what is available for extras?

Risk is trickier, particularly for retirees, as there may be a known income objective but an indeterminant time horizon. If we knew when we would die, it would be easy to establish a return that would deliver a set amount of income for a pre-determined timeline. Since we do not have a crystal ball (nor would we want one) we construct income portfolios using historical or other assumed return metrics to set a demarcation line defined as the “age of ruin.” How long a portfolio will be able to fund the investor’s needs and wants before it runs out of money.

While we might know how much income is required it is important to understand the best way to deliver the cash flow. And that answer is not clear cut. Traditionally, income portfolios have held an over-weighted position in bonds with a small equity ‘kicker’. A portfolio constructed this way reduces variability, but it is not always the right approach.

For example, will there be a requirement to draw down principal to support the required income? If so, then the drawdowns may outweigh the advantages of reduced variability. Think about it this way. Suppose you have $100,000 in laddered GICs yielding 2% per annum. That generates $2,000 per year in income with no tax benefit. If you need $8,000 per year to live on, you will be drawing down your principal at a rate of at least $6,000 per year. The portfolio will have zero variability, with a guarantee that you will run out of money along a pre-determined timeline.

It may be that a higher yielding portfolio, despite greater variability, is the better approach when principal is being eroded. Using the same analogy, suppose a hypothetical $100,000 portfolio that includes dividend paying stocks generates $4,000 per year in cash flow. To make up the shortfall in cash flow, requires a drawdown of principal of $4,000 per year. This drawdown is less intrusive than on the GIC portfolio, but it can do more harm in a period where the portfolio experiences a sharp sell-off.

Finding the appropriate trade-off is what makes this such a difficult challenge. Are you better off managing a low volatility portfolio if you are forced to draw down additional principal to meet your required income? Or does it make more sense to hold higher yielding assets, especially in this ultra-low interest rate environment, despite a ramp up in volatility?

Another consideration is inflation, which may be the critical point in this discussion – especially with government deficits exploding! If you need to draw down principal even further to offset rising prices, the chasm between a healthy portfolio and the age of ruin gets smaller.

How do taxes fit into the discussion? Interest income is taxed as ordinary income, which means you pay the marginal (highest) tax rate on the total value of the cash flow. Dividends from common and preferred shares and capital gains from option writing strategies can be more tax efficient, which may require less of a drawdown to end up with the same after-tax cash flow.

Then, given the twin negative effects of inflation and interest rate taxation, one could also argue that in the current environment bonds may be the highest risk security in the marketplace. Bonds have rallied substantially in the last decade as interest rates have declined. Bond prices act inversely to interest rates… i.e. declining rates, rising bond prices and vice-versa. With interest rates at or near zero, it is hard to find a scenario where interest rates continue to decline. Despite the talk of negative rates making the rounds.

And so, we come full circle. The alternative to a traditional fixed income portfolio with a small equity kicker is one that holds an enhanced income-producing equity position with a small proportion of bonds. This model carries greater risk, both in terms of variability and the fact that corporations can withhold dividends to shore up balance sheets. Management decides whether to pay or withhold a dividend, which hinges on current economic trends.

The challenge is to seek companies with a high degree of probability that the dividends will be maintained. Ideally, we would like to have companies that tend to increase dividends over time, thus providing the best of both worlds. Investors enjoy the tax advantages that come with dividends and they have increasing cash flow to support inflation adjustments.

The potential drawback is an increase in portfolio variability. Again, assuming that bonds are a low risk alternative which as I have said may not be the case, an equity-based portfolio that pays dividends will, by definition, be higher risk and certainly more volatile. Unfortunately for portfolio managers, we rarely know how much risk a client can tollerate until it is too late. Our job at that point is to help manage emotions so the investor can weigh the benefits versus the risk and hopefully stay the course until better times emerge.

To that point I want to look at two portfolios. The first is a traditional income portfolio with a standard 70% weighting in bonds and 30% weighted to a broad-based equity ETF.

The second is an enhanced income portfolio that generates the bulk of cash flow from dividends and capital gains. The enhanced income portfolio will include blue chip equities that have a long history of paying dividends and, more importantly, increasing those dividends through various market cycles, as well as a series of strategies that utilize option writing to harvest capital gains. This model holds a 40% equity weight spread equally across four blue-chip, high-dividend-paying stocks.

I have also included two option writing ETFs, including a 20% weight to the BMO Covered call Canadian Utilities ETF (symbol: ZWU) and 10% exposure to the BMO covered Call Canadian Banks ETF (symbol: ZWB). The role of options is to sell calls to reduce some of the downside risk associated with equities. Basically, an option writing exchange traded fund (ETF) should reduce equity variability by 30% which is about the same level of variability associated with a basket of bonds.

The Enhanced model also includes a 30% allocation to fixed income assets namely the iShares Canadian Bond Universe (symbol: XBB). Since this allocation is ballast meant to tamp down volatility during market declines, one must weigh XBB’s drag on the portfolio’s cash flow against its value as a volatility mitigator.

The choice when building an income model is to evaluate the required after-tax income, and the impact that may have on portfolio drawdowns, against whether the long-term risk is significantly different despite short-term gyrations in the underlying equities.

The question as to which approach is superior depends almost entirely on what level of income is required. Assessing after-tax needs versus wants and weighing that against riding the emotional roller-coaster associated with short term variability.

If the investor can survive off the income being generated by the portfolio, then the only question is whether the cash flow is sustainable. Not having to draw down principal during a market decline will go a long way towards ensuring the portfolio will deliver the promised results over a lifetime.

For some perspective on the variability question, we can look at historical performance as a signpost. Recognizing of course, that past performance is not necessarily indicative of future results. The following graph charts the performance of both models since October 2011.

Note that the Enhanced Model is significantly more volatile than the Traditional Model as shown in the following bar chart, which measures annualized returns (figure 2). The question is which portfolio is the better investment after a significant downturn. 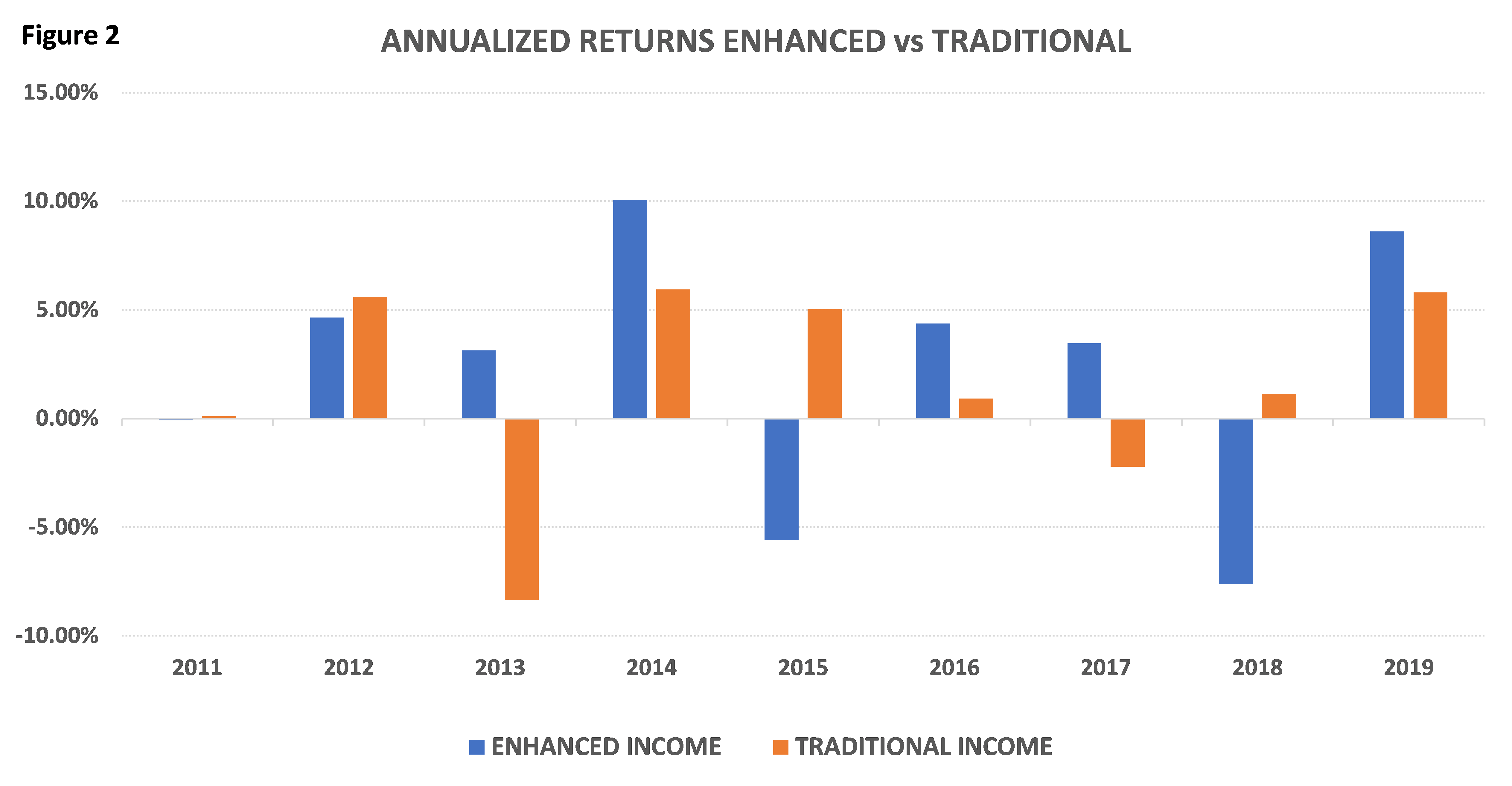 The first key to being able to rely on the Enhanced Model is believing that the underlying value of the portfolio will recover. That the individual companies will continue to operate and that the current dividends will be maintained. It also hinges on the amount of capital being withdrawn from the portfolio. If you can live on the cash flow being generated without having to draw down the principal, then short-term aberrations have less of an impact on the long-term return objective.

The next important step then is to focus on the cash flow being generated by each portfolio. Again, assuming $100,000 is invested in each model. Notice from the following chart, that the Enhanced model delivers significantly more cashflow than the traditional model. In fact, the cashflow generated by the dividends and capital gains distributions (i.e. capital gains being a component of distributions from the option writing ETFs) has been more stable than those generated by the Traditional model (see figure 3).

Then, as is particularly relevant in the current market environment as can be seen from Figure 1, which shows a marked decline in the Enhanced model as pandemic related fears grip the financial markets, the worst thing one can do is exit a viable long-term strategy because of a short-term aberration.

And there lies the rub! If you are invested in a higher variability portfolio like the Enhanced Model, then you should focus on whether it generates sufficient after-tax cash flow for your needs, and you can be free to ignore the monthly and yearly return data.