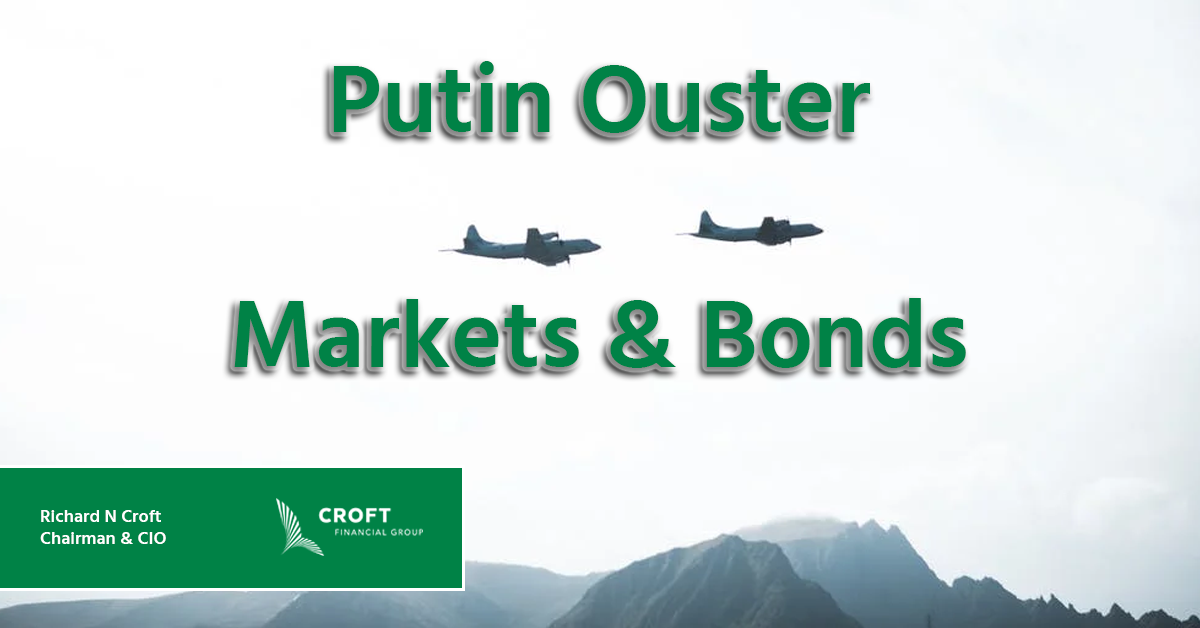 As the Russian invasion of Ukraine grinds on with no apparent solution through international diplomacy, some commentators are wondering if an end to the conflict could come if Vladimir Putin is removed from power.

Even U.S. President Joe Biden in a speech delivered in Poland said Putin “cannot remain in power.” Despite White House attempts to downplay the rhetoric, President Biden was steadfast that he was “not walking anything back!”

Those were powerful words from a powerful source that begs the questions: How likely is it that Putin will be replaced in a palace coup? and, if so, What happens next?

According to a recent article in the London Sun, intelligence analysis suggests that Vladimir Putin will be ousted in a “palace coup” staged by his inner circle within two years. 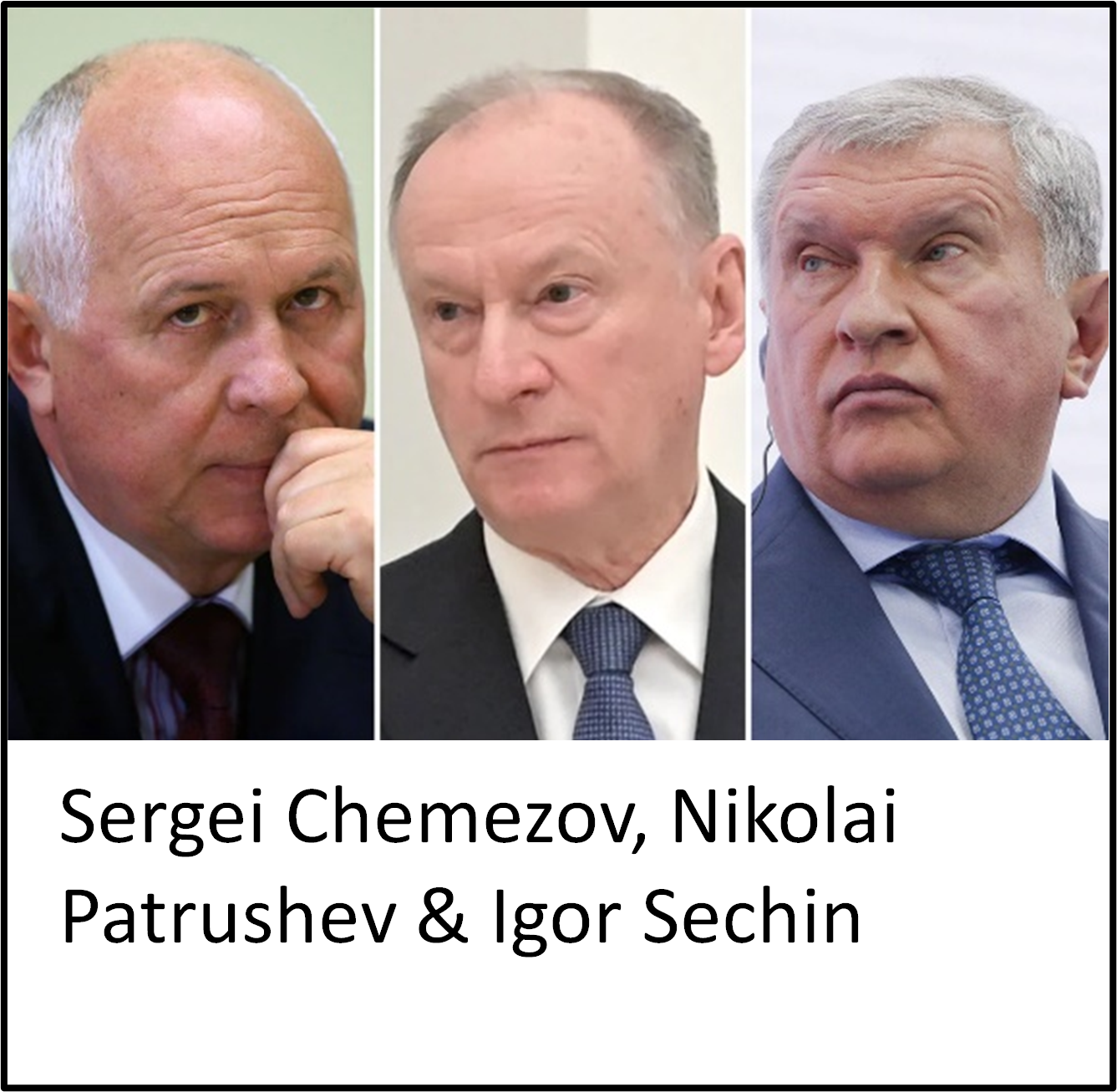 Underpinning this thesis, is that a prolonged war in Ukraine and the bite from aggressive sanctions will threaten the wealth and power of Putin’s inner circle (Sergei Chemezov, Nikolai Patrushev and Igor Sechin) making it “highly likely” they will depose him. According to the intelligence analysts, there is a “contract” between this inner circle plus other oligarchs and Putin. You can have your cash and you can spend it in St Tropez, you can buy your mega yachts, send your children to British public schools and Western institutions for education. In return his inner circle has agreed to never challenge Putin’s position, they will not get involved in politics and when needed can be called on for favours. 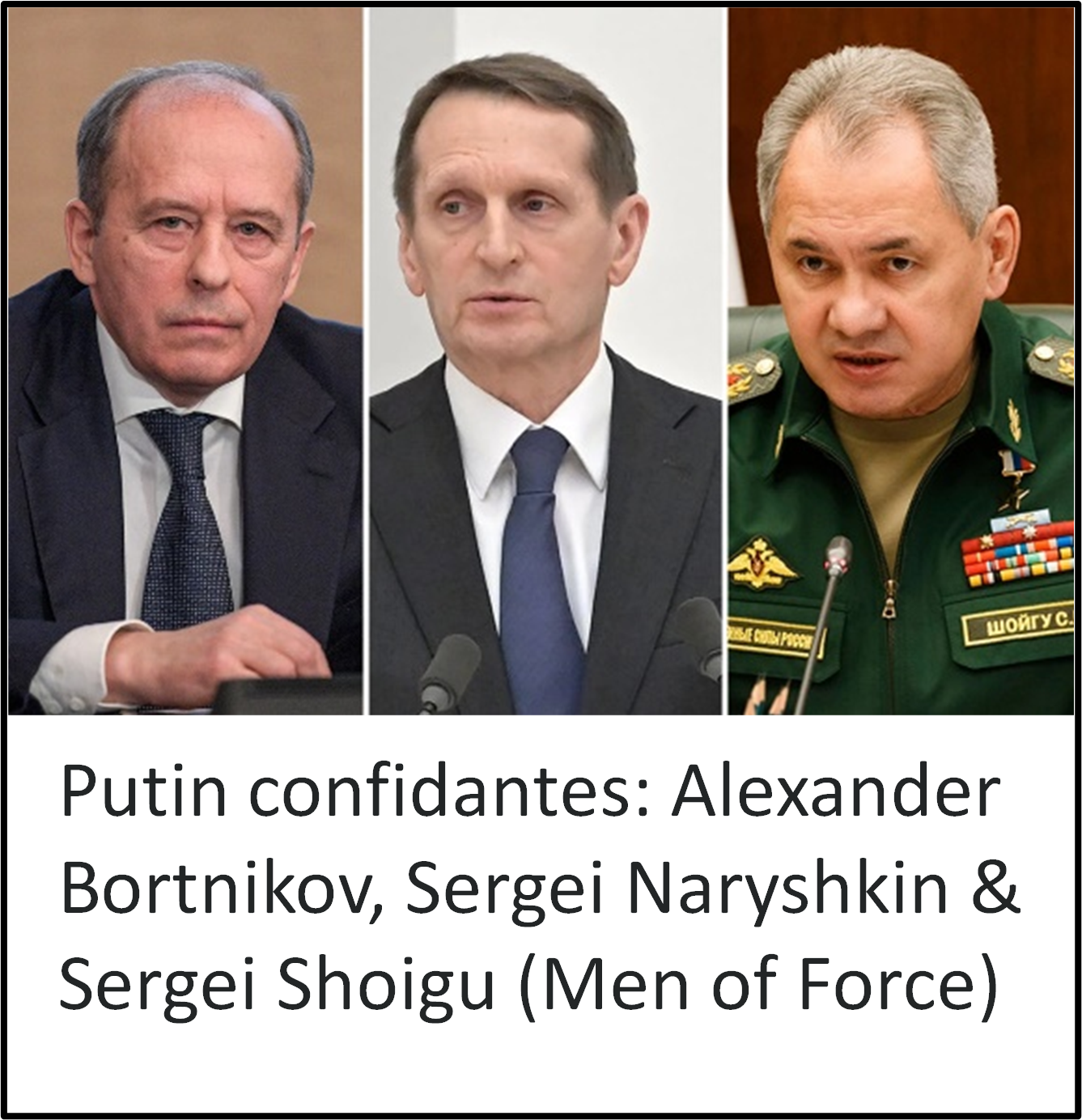 The challenge is what happens when Putin’s position no longer guarantees the safety and financial security of the individuals around him. Clearly some of that is underway as the weight of sanctions are unprecedented.

The other Putin confidantes forged relationships while working with Putin in the Soviet-era KGB security service or in the St Petersburg city administration. These men, Alexander Bortnikov, Sergei Naryshkin and Sergei Shoigu, are known in Russia as the “siloviki,” which translates as “men of force.” They are motivated by money and the ability to spend it. They have bought into the theory that the Russian empire is returning under Putin’s leadership.

The erosion of this deal comes from the “Dragonfly” intelligence analysts (www.dragonflyintelligence.com) , who correctly predicted that Russia would invade Ukraine. It hinges on whether the West is able to maintain and ramp up sanctions. The latest nail in the sanctions coffin is attempts by the European Union to ween their way off Russian energy. Key to this analysis in terms of what it means for a post-Putin era, is that the leadership will change from within rather than a mass uprising that deposed Libyan Dictator Gaddafi.

That a coup could become reality is validated by reports that Russian troops on the Ukrainian front lines are struggling, prominent Russian generals are among the thousands who have been killed, and in Russian cities street protests continue despite suppression. Press reports from the front line tell about a Russian helicopter downed by Ukrainian forces using a British missile, Ukranian helicopters hitting a storage facility in Belogrod with S-8 rockets triggering a massive fireball killing two Russian civilians, multiple war crimes surfacing, and a Russian soldier dying of radiation poisoning from the destruction of the Chernobyl nuclear power plant.

The dangerous scenario for Putin is that these actions make him genuinely toxic as a leader. And by toxic, we mean “endangering the safety and financial security of these individuals.” In that light, there is little that Putin can offer the oligarchs and men of force. The idea that Putin can counter his long-standing deal of financial security with offers to send their children to elite educational institutions in Beijing and holidaying in the Black Sea as a reasonable alternative to St Tropez or Oxford is simply not workable.

The worry for Putin is a prolonged conflict that allows the West to ramp up sanctions to a point where Russia falls into a financial crisis. That scenario will further alienate Putin and eliminate any possibility of bribing the inner circle when faced with dwindling access to financial resources.

According to analysts, there will come a point that the world will have to start thinking about a palace coup to remove President Putin. That scenario would involve elements within Putin’s Kremlin or the security services or, critically, any of the six individuals deciding that Putin as a leader has become too toxic to their position and a direct threat to them.

But don’t look for soldiers dressed in combat gear on TV explaining that the President has fallen ill. More likely, we will see a group of political hacks in ill-fitting suits walking into the Kremlin to negotiate a power shift in which Putin steps down for health or family reasons, effectively ending his rule. He will be replaced by a Manchurian candidate, which will be someone plucked from the same relative obscurity that Putin once occupied. The recent statement from Russia’s Foreign Minister Sergei Lavrov that Putin is in good health is telling. Not that he provided new information, but that the Kremlin felt compelled to say anything.

It is unlikely that any replacement would alter Russia’s view about the West, implying that any change will be more of a “rebrand rather than a reset.” On the upside, notes Dragonfly, “any new cabal in charge of the Kremlin… would start with an end to the conflict in Ukraine and likely trigger a significant rally in the financial markets.

Personalist autocratic regimes (where the government is ruled by one individual) rarely transition willingly. The majority of regime change among personal autocrats from 1946 through 2008[1] were the result of coups or revolts. In most cases the fall from grace was nasty, as 80% of the ousted leaders were jailed, exiled or killed. Equally disturbing, from the West’s perspective, is that only 20% [2] of fallen personal autocracies are replaced by democracies.

Most likely a post-Putin Russia will remain autocratic. Made more likely when you consider that Putin set in motion a similar negotiation (supported by the oligarchs) to replace Boris Yeltsin who was suffering from poor health. Under Putin’s leadership, the State agreed that it would take no action against Yeltsin or his family, for crimes he was accused of committing.

Under a new leader, even one from Putin’s inner circle, policy toward Ukraine might be different. A leader who comes from outside the inner circle might offer better prospects for political openness and, dare we say it, a transition to democratic ideals. Unfortunately, that may be too much to hope for, as real political change will require more than Putin’s removal.

Still, the prospects for a post-Putin Russia are not all grim. The Russian population is well-educated, and Russia is a relatively wealthy country. Given these conditions, there are studies[3] that suggest Russia’s prospects for stability and more open government might be better than expected. When autocratic regimes fall in a rich country, they are more likely to become, and stay, a democracy.

Meanwhile, like an end to the war in Ukraine, as we emerge into a post-COVID world, a resolution to our many headwinds – supply chain issues, inflation, regionalization – still seems quite remote. On the financial markets, the last full week in May broke a seven-week streak of losses. That turnaround prompted us to review a one year-chart on the S&P 500 index, which appears to show signs that maybe – and that is a big maybe – we have passed a near-term bottom.

During the previous decline, the S&P 500 index approached, but did not quite cross into bear market territory, a level 20% below its most recent high. That and other technical measurements (multi-day moving averages, Bollinger Bands, etc.) seem to indicate that U.S. equity markets, if not yet ready to take a clear upward direction, seem at least disinclined to go significantly lower from here.

Technically, we are not quite there, but a few ‘green shoots’ are signaling that we may start moving in the right direction. 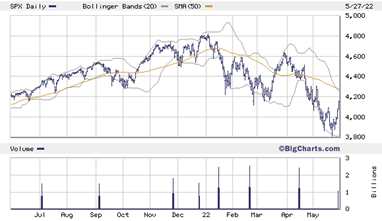 Most market participants have been looking for an excuse to pick a bottom, especially in light of the jacked-up performance at the end of May. The challenge with bottom fishing is that you have to “buy the bad news” in the teeth of a decline. That takes fortitude and a willingness to acknowledge that fixating on the last downward tick in a bear market swoon is a poor investment strategy.

The fundamentals are interesting as we appear to be returning to a time in which, paradoxically, bad news is good for markets. The sharp sell-off in global stocks has negatively impacted consumer wealth (the bad news) but it has slowed demand for big ticket items (the good news).

In keeping with that theme, housing prices have fallen for three consecutive months (bad news) which tends to have an outsized influence on spending patterns and inflation expectations (good news). A significant miss on quarterly earnings from the retail giants, Target and Walmart, caused their shares to swoon. This indicator of decline in major retail sectors prompted the Atlanta Fed to reduce their estimate for year-over-year real GDP (net of inflation) growth from 2.4% (May 18th) to 1.8% as of May 25th, and slowing growth is likely to dampen inflation.

However, slower GDP growth usually means softer share prices. Although, one could argue that much of this slowing has already been priced into the market. One must also be mindful that a number of Wall Street banks continue to warn about a U.S. recession at some point over the next nine months. There are also outliers who suggest that a low-growth high-inflation scenario (i.e., stagflation) is a possibility.

Fortunately, consumers that are flush with cash (US $2 trillion excess reserves) are now spending more on services such as travel, leisure, and restaurants. If goods-based inflation begins to subside, that boost may be enough both to prevent a serious recession and to temper the hawkish sentiment among global central bankers.

No one doubts the Fed’s desire to bump up rates by 50 basis points at each of their next two meetings. We believe these hikes are priced into the market. The question is, what’s next? We suspect, at that point, central banks will take a breather to assess the damage. If inflation continues its downward trajectory, or if there is an acute slowdown in the economy, central banks will likely take their foot off the brakes. That outcome falls within our bad-news-is-good-news paradox and would likely be positive for equities.

The trick is to recognize that picking the absolute bottom is a fool’s game. The best we can hope for is to take advantage of lower prices to buy securities that will deliver on the investor’s medium- and long-term objectives.

THE ROLE OF BONDS IN A PORTFOLIO

To make a case for bonds, you need to look at them within the context of a portfolio. Bonds being one of the three principal asset classes – i.e., cash, fixed income (bonds) and equity – generally provide stability (not so much in the current environment) within a portfolio structure. Because bonds provide a measure of stability, investors are better equipped to stay invested over the long term.

With interest rates approaching zero over the last several years under accommodative central bank policy, the traditional role that bonds have played as an effective way to reduce risk within a portfolio has been diminishing. As a result, we have been managing this across our investment mandates by reducing bond holdings in both size and duration.

That is beginning to change. Investment grade bonds currently yielding between 3.5% and 4.5% per annum are starting to look attractive. Our view is that bonds may again provide some portfolio ballast once we see yields above 5% per annum. We are close but, so far, we have not reached that demarcation line.