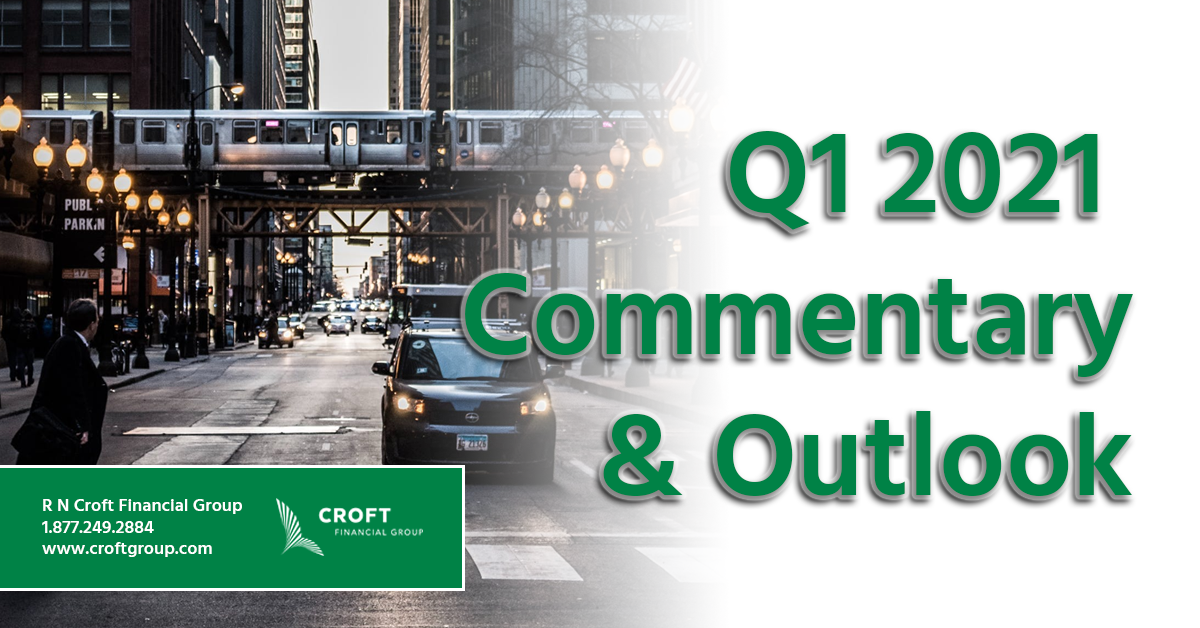 Within the first few days of 2021, the last vestige of uncertainty from the U.S. presidential election about which party would gain control of the Senate was concluded in two separate run-off rates in Georgia on January 5th, with both Republican incumbents losing to Democratic challengers.   Investors believed a Biden administration would spend lavishly to defeat Covid-19 and help the economy recover and, with the Democrats now in control of the U.S. government, this paved the way for U.S. markets to extend their rally.

Beneath the surface, volatility within the sectors of the broader market resulted in a rotation away from higher-valued technology stocks, which benefitted from pandemic lockdowns, towards stocks with more sensible valuations whose prospects will improve as the economy reopens.  To this point, by the end of the first quarter the S&P500 index, which is the broadest indicator of the U.S. equity markets and economy, meaningfully outpaced the tech-heavy NASDAQ for the first time since the fourth quarter of 2018. This relative outperformance has only occurred about a third of the time going back to 2012.

Meanwhile, the S&P/TSX Composite index, Canada’s broadest measure of the economy, finished first amongst the lot in Q1 2021, in keeping with Canada’s historical tendency of emerging from recessions sooner than the U.S.

For the moment, stock markets seem unconcerned with the long-term effect of rapidly rising government debt levels on both sides of the border.   Whereas both countries have adopted a ‘do-whatever-it takes’ policy from the onset of the pandemic, the Biden administration is attempting to implement game-changing social policy at the same time. The markets’ apparent lack of concern seems baffling. It may be that investors are willing to grant some leeway because Democrats have at least thought about how to finance their above-the-board spending plans. Specifically, the US $2.3 trillion infrastructure bill and the US $1.8 trillion American Families Plan will be financed by considerable wealth-based redistribution initiatives that Republicans, who still have a say, will resist.

Is Inflation a Risk?

The bigger issue for investors is a potential worst-case inflationary surge that the mountain of accumulated debt will contribute to.  The word of the day so far is “transitory.”  Current expectations are for some short-term inflationary bumps resulting from the lingering impact of pandemic related supply chain disruptions. For example, the global shortage of semiconductors is causing a ripple-effect across supply constraints and price increases across various industries. As supply-demand balances normalize during the broader recovery, these effects are expected to be short-lived.

Bond and currency markets, however, have had a different take on matters.   Despite a sell-off in the price of stocks and bonds alike at one point in February, bonds ended the quarter lower.  Whereas companies that can pass through higher costs to customers will ultimately be able to withstand the effect of inflation with their share prices intact, inflation negatively affects the price of all bonds alike.   So, when Fed Chairman Jerome Powell, whose mission it is to keep rates low for as long as possible, conceded that inflation was a realistic near-term possibility, the bond market doubled down on its bet from the start of the year, that the Fed would be forced to raise rates sooner than forecasted.   That scenario, if correct, provides little incentive for bond prices to recover to the generational highs where they were at the start of the year.   Although to date, market volatility has only dented the longer-term trendline for stocks, investors should prepare for continued volatility as the inflation narrative unfolds.

U.S. Dollar vs The Loonie

The U.S. dollar has weakened against the Canadian dollar since the start of the year.   The relatively strong Canadian dollar is best explained by the combined impact of a 20% rise in the price per barrel of WTI Crude and significant increases in other commodities since the start of the year, as well as a more ‘hawkish’ Bank of Canada. The BoC Governor recently diverged from his U.S. counterpart by signaling that Canada could reach its 2% inflation target one year earlier than it originally forecast, in 2022 compared to 2023.

During the first quarter, the Income (TCG534) and Alternative Strategies (TCG538) Pools contributed positively to the overall portfolio.   We view TCG534 and TCG538 as alternatives to equity Pools for their ability to provide greater stability and enhanced returns, respectively, in market conditions in which equities would experience greater volatility.   During the correction of longer-term, primarily government bonds in February, the Income Pool benefitted from having little direct exposure to this sector.   This was in line with TCG534’s longer-term objective of seeking to generate average annual income of 5% per year, something treasury yields are unable to provide.   With a greater focus on opportunities arising from market volatility, TCG538 finished the quarter flat.   Essentially, TCG538 is an option writing Pool designed to accomplish two things: 1) provide additional tax efficient income to the mandates; and 2) since option writing is a hybrid strategy, TCG538 acts as a bridge between the income Pool and the equity Pools.

There are now three equity Pools currently in our Croft Financial Group CPC Enhanced Mandates. In mid-March, the MFG Total Return (TCG536) and Legacies Growth (TCG529) Pools were added to diversify between portfolio management styles and improve performance.  Despite the long term out performance of the MFG Total Return Pool and near term out-performance of the Legacies Growth Pool, the transition into the Enhanced Mandates was not a smooth one from the standpoint of market volatility. As such, the timing of the rebalance and subsequent volatility contributed modestly to the negative trends in these mandates at the end of the quarter.

Moving forward, we will continue to monitor both the CPC Pools and all investment portfolios holding them, focused on ensuring these enhancements will result in improved performance to your portfolio in the months that lie ahead.