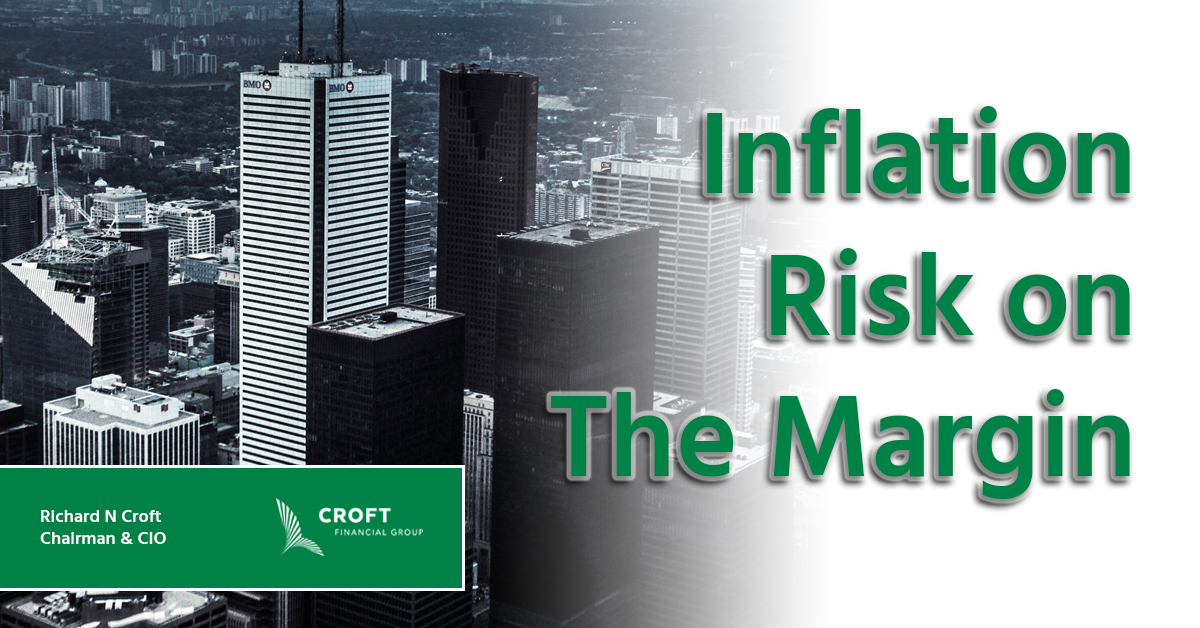 INTRODUCTION – RISKS ON THE MARGIN

On the margin, we are bullish on the outlook for 2021. There will be bumps, bruises, changes in the timeline but, overall, 2021 will end as a beginning of the return to normality, and that should play well for the financial markets.

Obviously, there are risks on the margin. New variants of COVID surfacing in the United Kingdom, South Africa, and Italy, are a case in point. The response was immediate: travel restrictions between the UK and EU were activated, shipping hubs were shut down and global markets experienced a pre-Christmas surge in volatility.

The new strain seems to be more transmissible but does not, at this point, appear to be more virulent. Fortunately, most scientists believe the Pfizer and Moderna vaccines should be just as effective against the new strain. Assuming the financial markets come to the same conclusion, any spike in volatility will be short-lived and we should break out of this tug-of-war between re-opening, stimulus trades and sideline risks.

We have also noted that many in the financial press, some investment analysts and a minority of economists have raised concerns about inflation. They are raising fears that global quantitative easing will lead to an inflationary spiral much like we saw in the 1970s.

That question was posed to Fed Chairman Jerome Powell at his press conference following the December FOMC meeting. The U.S. Federal Reserve’s (the FED’s) consensus view is that inflation will come in at 1.2% in 2020 rising to 1.8% in 2021. Not nearly enough to change the FEDs current strategy. However, a more serious spike would have an impact on the relative valuations across asset classes. To that end, we felt it was appropriate to provide our clients with some historical context.

A RETROSPECTIVE ON INFLATION 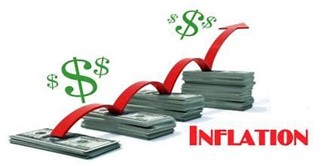 Return with us to January 20th, 1969 which was Richard Nixon’s first inauguration. He inherited a recession brought about by Lyndon Johnson’s lavish spending to support the Vietnam war and to prop up his vision of a Great Society. Nixon himself would persuade Congress to backstop the war effort despite having no obvious path to victory.

The massive borrowing required to fund the war resulted in higher prices and wages. In August 1971 as inflation was spiraling higher, President Nixon enacted a 90-day order to control wages and prices. A response that was very much at odds with what one would have expected from a fiscal conservative as Nixon was perceived to be.

By mid-1972 Nixon recognized that his re-election to a second term would depend on how voters perceived his strategy to harness inflation, which was becoming a hot topic in political debates. Fortunately, for Nixon, he was a consummate politician. In October 1972, just before the Presidential election, Nixon was able to change the narrative by signing into law reforms that would expand Social Security. Nixon won the 1972 election in a landslide, with 60.7% of the popular vote and carrying 49 states.

Early in Nixon’s second term, global growth weakened and unemployment in the U.S. edged towards double digits. The FED, guided by Chairman Arthur Burns, embarked on easy-money policies at the behest of the President. Nixon wanted low interest rates to kickstart the economy and rein in unemployment. The strategy worked initially but gave rise to rampant inflation that began in the latter half of 1972.

By early 1973, the government had responded with a second swath of wage and price controls. The intent was to dampen the impact of higher oil prices. This strategy also worked… for a while! But, once controls were lifted, businesses began to play catch up by increasing prices to maintain profit margins. 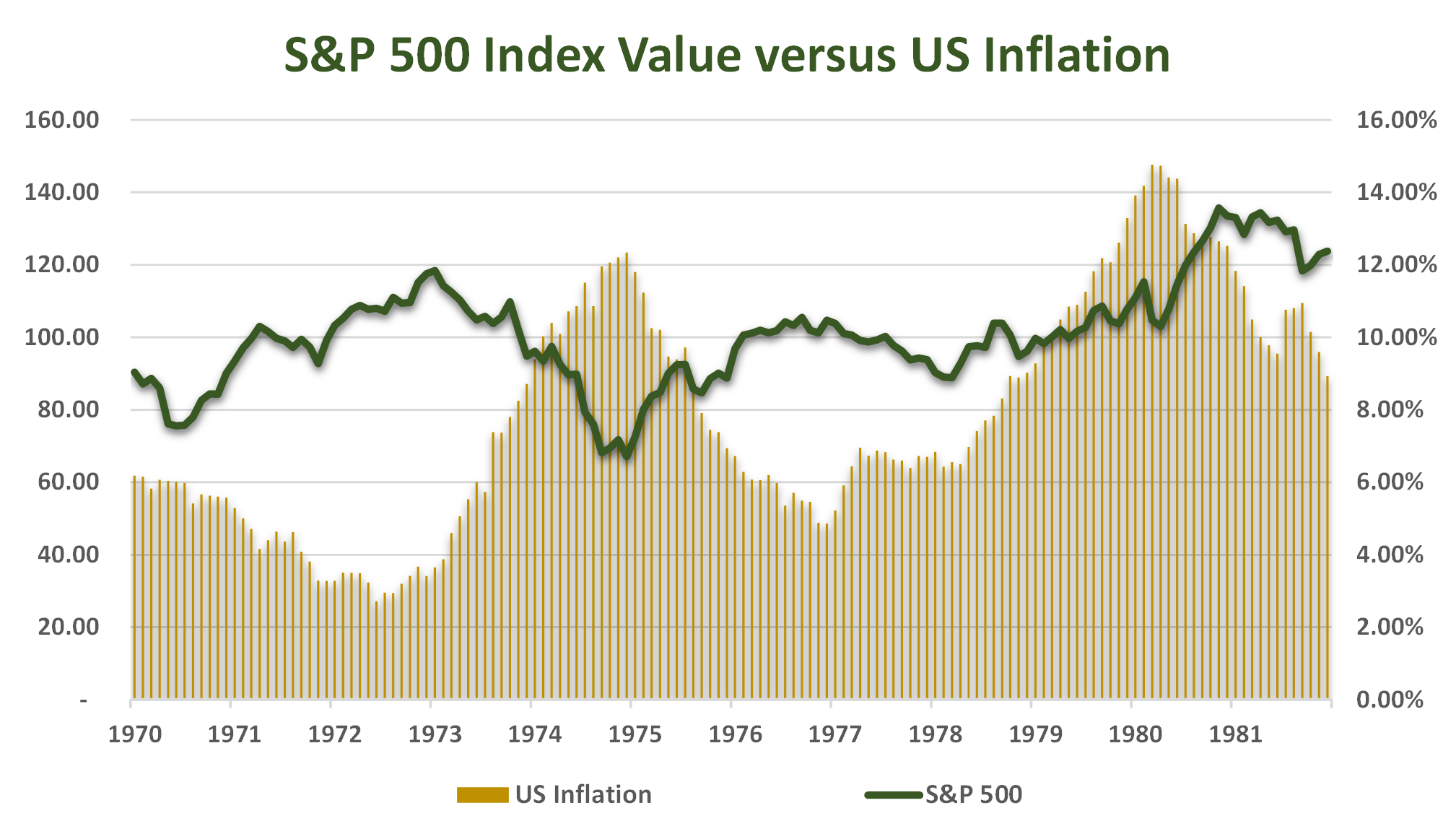 In August 1979, a new FED Chair (Paul Volker) reversed the easy money policy and began a series of rate hikes that peaked at just under 20%. These rate hikes were catastrophic for interest-sensitive industries, such as housing, and big-ticket items like cars and household appliances. Not to mention the lost decade for stocks (see accompanying chart).

Much has been written about what caused the great inflationary spiral: Nixon’s decision to abandon the gold standard and transition the Greenback to a “fiat currency,[1]” central bank mismanagement, the oil embargo, Keynesian economic policy, the failure of wage and price controls and, in the broadest sense, worker and consumer expectations.

Whatever weight one applies to the cause and effect of each trigger, the 1970s inflation debacle sheds light on the Pogo Principal:[2] “we have met the enemy and he is us!” History proves that Nixon’s wage-price freeze was popular as “bold” presidential action often is, even when “standing there and doing nothing” might be the better choice.

The 1970s was the greatest example of unintended consequences when government attempts to intervene in the natural trajectory of the business cycle. All we can hope for is to learn from mistakes. As Shultz told Nixon in 1973, at least the debacle had convinced everyone that “wage-price controls are not the answer.”

Today’s challenges are different but the risks on the margin are similar. There is a significant concern that massive monetary and fiscal stimulus could result in an unexpected inflationary spike. Especially if you believe, as we do, that pent-up demand coupled with healthy consumer balance sheets in the second half 2021 will result in a spending surge the likes of which we have never seen.

The important question is whether the expected spike in consumer demand will lead to a 1970s inflation scenario? If it does, could we see a 50% sell-off in financial markets like we experienced from late 1973 through the end of 1974? These are reasonable concerns as our current ultra-low interest rate environment has so far supported one of the quickest rebounds in stock market history.

We doubt either scenario will play out in 2021. While we are convinced that a surge in economic activity will occur in the second half of 2021, the answers rest on whether one believes a robust economic recovery will impact prices. We acknowledge that surge may cause some pockets of inflation, especially where demand far exceeds supply.  For example, within the travel (airlines, cruise ships, etc.) and leisure (hotels, casinos, etc.) industries, restaurants, or brick and mortar retail. However, we think these price increases will be temporary.

More likely, once the pent-up demand is satisfied we think inflation will abate, allowing the FED to maintain their current low interest rate and quantitative easing strategy. We expect the FED to normalize rates at some point in 2023.

A PERSPECTIVE ON VALUATION

If you accept our baseline scenario, then the question becomes how much of this has been baked into current valuations? The recovery from the March lows has been remarkable in terms of both the market’s resilience and resolve.

Whether investors believe valuations are stretched comes down to how they answer the following: Does the rally portend a coming economic rebound or are we witnessing a bubble within a global pandemic?

At present the S&P 500 index is trading at 37.4 times current earnings which is well above the historical average of 24.7 times.

Sectors within the broader index are trading at even loftier valuations. Technology, for example, is trading at more than 59.1 times[3] current earnings, which is also well above the historical average of 40 times. 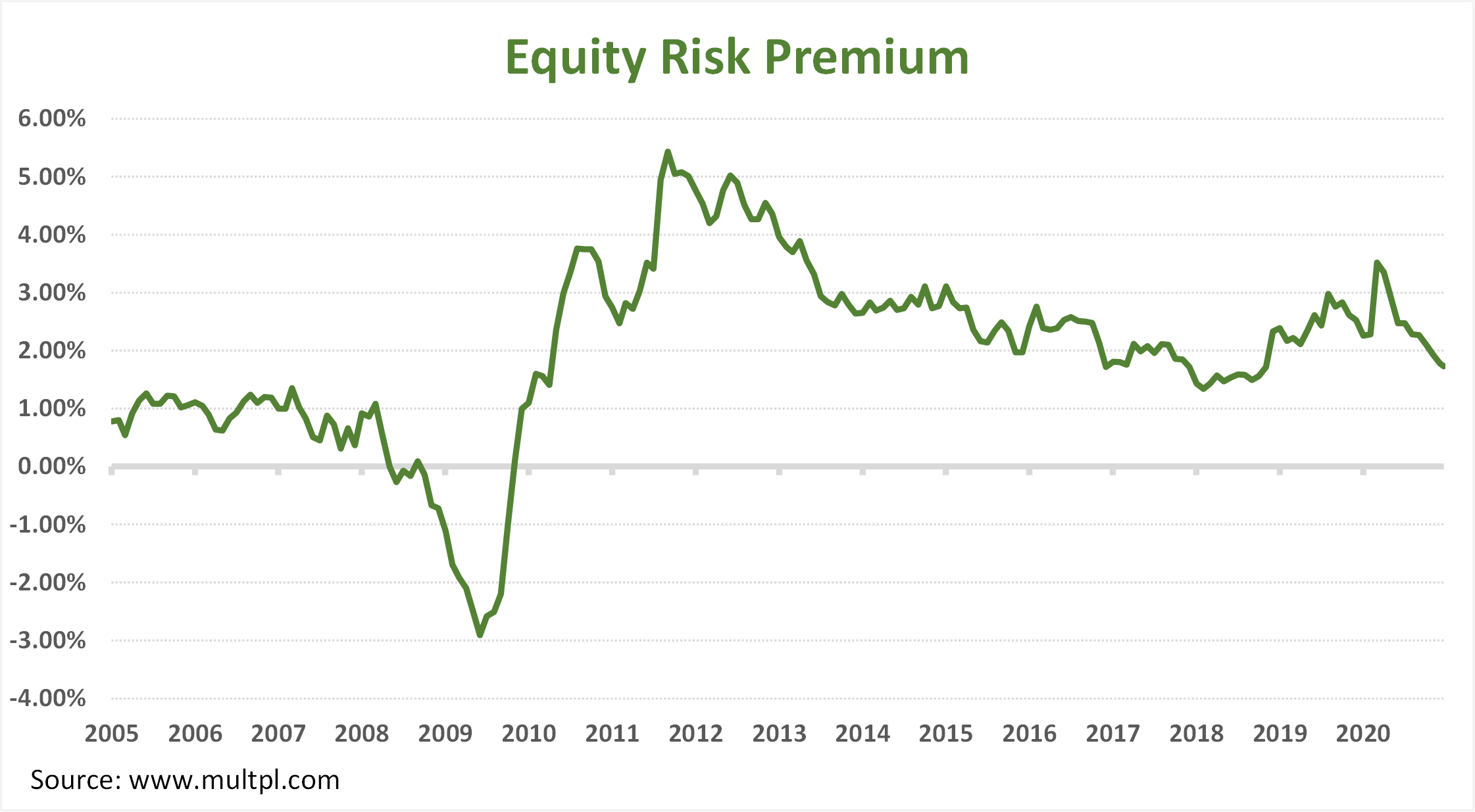 In that light, what constitutes reasonable value? Price-to-earnings measured against the historical average is useful, but it does not account for the relative value of alternative assets.

To measure relative valuation we would look at the Equity Risk Premium. This measure compares the earnings[4] yield on the S&P 500 index against the risk-free rate. Looking at this metric, equity values, while elevated, seem reasonable.

We also recognize that segments of the market seem to be in bubble territory. Tesla’s valuation up more than 600% this year, seems stretched. With no defined objective but to make angel investments in under-valued companies, billions have flowed into SPACs (Special Purpose Acquisition Companies). Recent IPOs (Airbnb, Door Dash) that doubled in value on their first day of trading, represent fizz on the broader market.

Overall, however, aside from the IPO “buy-at-all-cost” mentality, the SPAC euphoria and stretched valuations for disrupters, we believe current estimates are justified based on the metrics discussed in our last Research Update (“Alchemy for the Optimist”).

On a macro level, the vaccine rollout is the light at the end of the pandemic tunnel and we suspect, as inoculations ramp up, so too will consumer enthusiasm. Any thesis that forecasts a 1974 style sell-off hinges on the position that an unexpected inflationary spiral will pummel an over-valued market.

We dismiss a 1974 style death spiral from both perspectives: 1) central banks have been trying to boost prices for the past ten years with little success and, 2) we do not believe that financial markets are significantly over-valued.

Our base case scenario has the ten-year yield hovering around 1%, which means that fixed income assets are not a viable alternative to equities. Given reassurances from the FED that it would continue supporting the economy with massive monthly purchases of U.S. government bonds, the objective is to maintain ultra-low interest rates until the economy has fully recovered, which will not likely happen until 2023.

[1] Fiat money is government-issued currency not backed by a commodity such as gold. Fiat money gives central banks greater control over the economy because they control how much currency is printed. One danger of fiat money is that governments will print too much of it, resulting in hyperinflation (source: Wikipedia).

[2] The Pogo Principal defined by the genius of cartoonist Walt Kelly, is simply this: No matter how wacky your current situation it is just the latest version of the same ol’ thing.