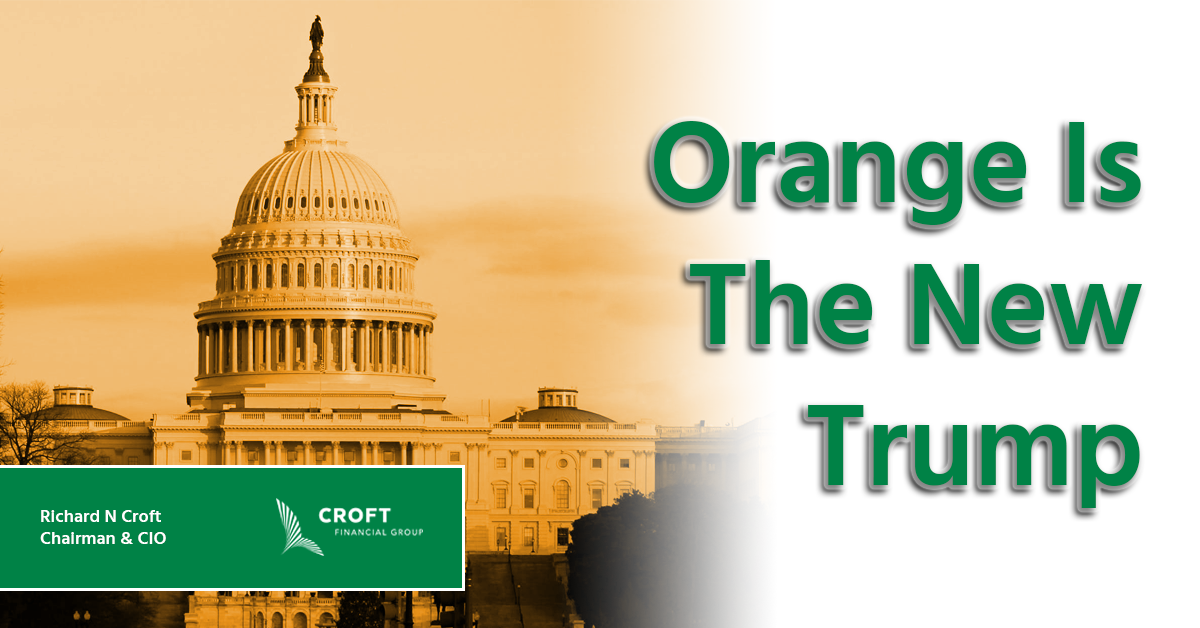 Last week’s assault in Washington illustrates the rage underpinning the chasm dividing the U.S. political landscape. Depending on where you get your information, the riots / protests were the work of anarchists, thugs, seditionists, or patriots and everyday Americans protesting a stolen election.

What we do know – without having to resort to network commentary – is that President Trump incited his followers to “take back our country” by marching on Capitol Hill. A message amplified by Donald Trump Jr., who tends to flail his arms to shore up repetitive messaging, and reinforced by lawyer Rudy Giuliani’s “trial by combat” declaration.

The U.S. Congress is drafting Articles of Impeachment that the Democrats intend to bring to the floor of Congress unless the President resigns, or Vice-President Pence initiates the 25th Amendment to remove the President on the grounds he is unfit to serve.

Most likely we will see the impeachment resolution pass in Congress and then sit at the desk of the speaker until President Elect Biden gets through his first 100 days. That will bide him time to have his Cabinet nominees vetted by the Senate and allow him the opportunity to push his agenda during the honeymoon phase. At the end of the first 100 days Congress will push the impeachment documents to the Senate. A conviction in the Senate, which requires a 2/3rds majority, would prevent Trump from running for office in 2024. And there is a possibility that the Senate would convict Trump if he continues to rant after leaving office.

On that latter note, I was struck by the political savvy of the vice president, which to be fair, is why Trump chose him in the first place. Pence is keeping the 25th amendment in his back pocket in case the President becomes more “unstable” and, I suspect, he has secured agreement within the cabinet through backdoor negotiations should he choose to initiate removal of the President.

Combining the threats of impeachment and the 25th amendment, whether or not the latter results in early removal, should provide sufficient guard rails to weigh down the President’s bully pulpits. As for those bully pulpits, it helps that President Trump has been banned from Facebook, Instagram, Twitter and You Tube.

The more serious concern is the lack of security on Capitol Hill. Agencies including Homeland Security, the FBI and Capitol police were woefully unprepared for the assault. If that were not enough, one agency after another issued statements they were unaware of the potential for violence despite the fact it was plastered across the Internet including mainstream sites like Facebook and Twitter. We are talking about hate speech, threats of kidnapping and murder of government officials. Makes one wonder how this was missed?

That said, we doubt that security forces will be caught flat footed should there be any subsequent attempts at anarchy. Already we are seeing reports of marches on January 17th and inauguration day. We suspect there will be an abundance of security to deal with any potential threats.

The mainstream media which, whether they want to admit it, includes FOX News, is another story. All mainstream media are complicit in fueling the great divide as they all exacerbate their own agendas with contempt for political norms. CNN labels Trump followers as “Trumplicans.” FOX has its own political spectrum, categorizing Trump believers as Great Patriots, Republicans who exercise political discretion as “Rhinos” and anyone else as “Radical Dems.”

This is the political backdrop the U.S. finds itself in. The gulf between two political ideals has reached such extremes that one wonders if there is any hope that it will return to any sense of normalcy. You simply cannot engage in a serious conversation when it begins with name calling.

The Democrats are not radical socialists, nor are the Republicans anarchists. But for the sake of ratings, networks fixate on the extremes: Bernie Sanders, Elizabeth Warren and the Squads’ version of socialism; Mitch McConnell, Josh Hawley and Lindsay Graham’s efforts to maintain the status quo, including lower taxes and standing in the way of climate change initiatives and universal health care. It makes for good TV! 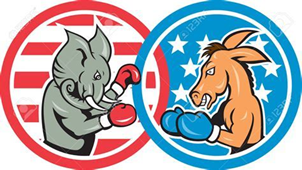 The divisions are short-sighted when you consider that the core values of the two political parties are not that far apart.

If the U.S. is to come together, Americans need to be careful accepting unsubstantiated innuendo as truth. Reports that President Trump relished the anarchy and could not understand why those around him at the White House were not applauding the assault may be true, but it amounts largely to hearsay.

The American middle class must also recognize that the individuals attacking the center of government were extremists. Many of these mob / patriots occupy the bottom rungs of the evolutionary ladder.

To that point, I cite Richard Barnett, the man from Arkansas who can be seen with his feet up on Nancy Pelosi’s desk. A classic case study of a personality that combines extremism with stupidity. And I am being generous in this assessment!

Not only did this guy trespass on government property (a federal crime) he stole a letter from the Speaker’s desk (a federal crime), trashed her office (a federal crime) and justified his position in a series of interviews that he owned the office as a taxpayer and was loaning the premises to the Speaker of the House. Interestingly, he has said very little since the FBI arrested him at his home one day after the siege. I suspect he is facing at least ten years in a federal prison.

Jake Angeli, the shirtless man in a buffalo horn head dress wearing war paint who claims to be a Qanon leader. Arrested! A Proud Boy leader from Hawaii was arrested at the airport as he returned home. An elderly lady screaming in the Rotunda of the Congressional building that she was coming to get Nancy Pelosi. Arrested! And likely to spend the rest of her life in prison. Murder charges are being investigated as a Capitol police officer was killed after being bludgeoned by a fire extinguisher. A 35 year old woman was shot and killed by security forces while trying to break through an internal barricade. And for what?

After four years of lies and fallacies, there is some hope that the Washington insurrection broke the fever of division. We are not convinced of that but recognize a clear shift among moderate Republicans to distance themselves from President Trump. 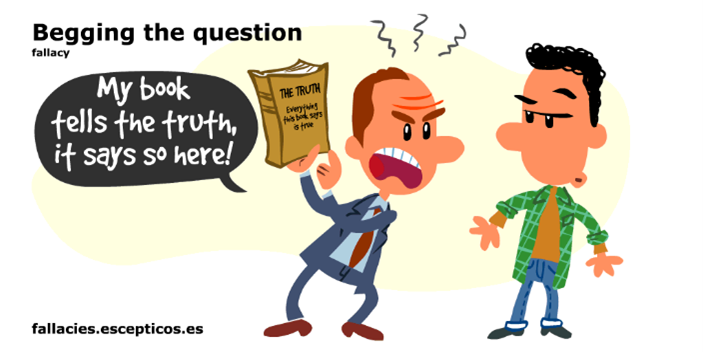 That said, we cannot ignore the fact that Trump garnered 74 million votes, which was the most ever assembled by a losing Presidential candidate. We also know that he has raised more than U.S. $250 million in his efforts to overturn the election. That money is his to do with as he chooses when he vacates the White house. The best guess is that he will launch his own media conglomerate spewing unvetted conspiracy theories that will compete with mainstream media. He will have a following, and that will continue to sow the seeds of division.

We doubt that Trump will run again in 2024. But if he has a sizeable base from which to draw, there will be Republicans who will seek his support to gain the party’s nomination for the next Presidential cycle. He could also promote family members (Donald Trump Jr.  and / or Ivanka Trump) as puppets, which could be more dangerous than a return of Donald Trump.

At best, we think Donald Trump as ex-President will continue to sow discord into American politics. Assuming, of course, he does not get caught up in a series of State led investigations that could put him into an orange jumpsuit.  Our hope is that the Republican party returns to its roots and moves away from Trumpism. Unfortunately, we cannot make investments on the back of hopes and prayers.

I wanted to share the political backdrop, including life after a Trump administration, so that we can outline long term investment strategies that should continue to build wealth despite the polarization of America.

One positive is that we have an incoming administration that will seek to heal. President Biden is considered a moderate, which means he will not likely introduce disruptive legislation that will result in major economic damage.

However, Biden is the oldest President ever to take office and we suspect that he will only serve one term. If anything were to happen in the interim, there is genuine concern that vice-president Harris leans more to the socialist side of the ledger. That would cause an economic shock and negatively impact stock prices. Unfortunately, there is no way to predict a health scare. 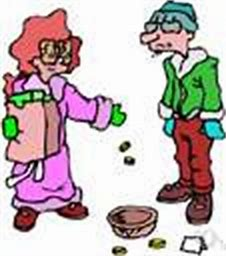 We suspect the Biden Administration will introduce a series of spending goals in his first 100 days. This will include a COVID relief package that will put $2,000 into the pocket of every American adult. Look for a multi-trillion-dollar infrastructure program that will include environmentally sensitive programs such as a nationwide grid for electric vehicles. We will almost assuredly see a package for U.S. state and local governments to ramp up vaccinations. All told, we’re looking for U.S. $7 trillion in new spending.

As for the vaccine roll out, it is our view that the industrialized world will reach “herd immunity” levels by September 2021. That is the primary requirement if we are to have any hope of a return to normalcy.

If we are correct in this assessment, that will be the point at which global economies will start to be fully open for business, which we think is underpinning the current surge in global equity values.

Central banks will also remain on the sidelines well into 2022. The ultra-low interest rate environment will provide a buffer against serious setbacks in equity valuations but will not likely encourage more expansion of price to earnings ratios. Further upside for stocks will be on the back of higher earnings as economies re-open.

The risk to our base case forecast is any variant in the COVID virus that stymies the efficacy of the vaccine. So far, scientists believe the vaccine will defeat the current variants. We have not assigned a high probability to worst case scenarios, but they reside on the margin.