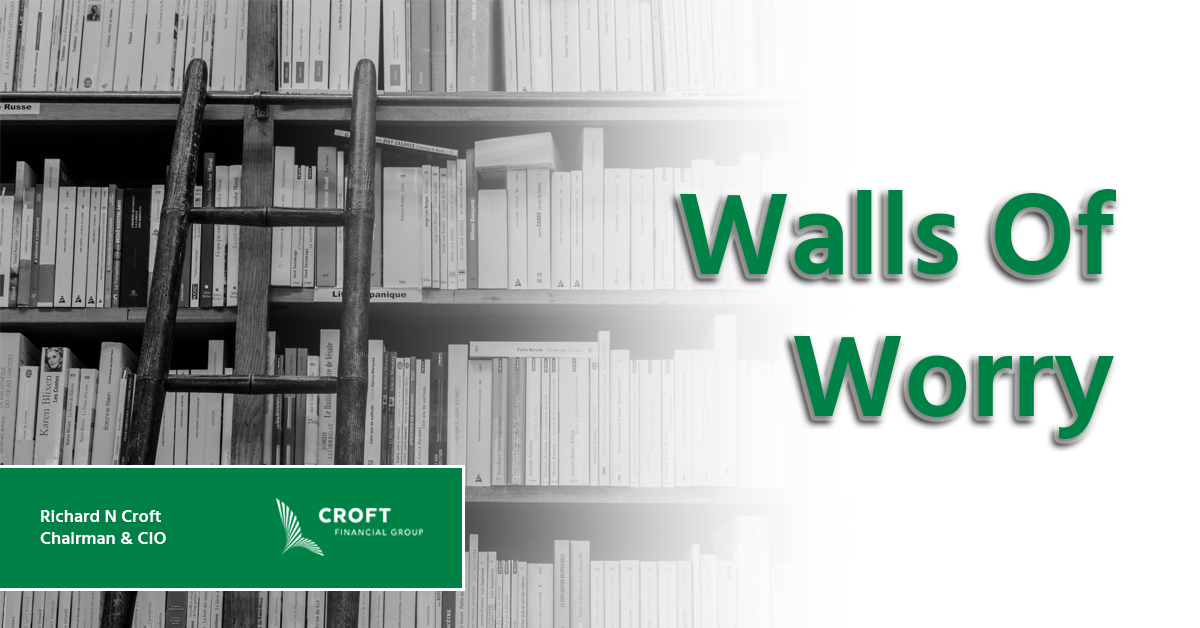 You can be excused for thinking that equity markets have gotten ahead of themselves. As of the close of trading on Monday June 8th, 2020, the S&P 500 composite index had recovered all year-to-date losses. Even more impressive was the performance of the NASDAQ 100 stock index which set another all-time high. That was, of course, before Thursday’s sell-off that highlighted the fragile foundation underpinning equity markets.

It begs the question about whether Thursday’s setback was a pause before equity markets resume their climb up a wall of worry, or a change in the underlying trend that engulfs equity markets in an expanded trading range. Let us explore by assessing current risks (i.e. walls of worry) and examining potential outcomes and strategies.

In our discussion around barriers, I cite wall number one which underlines the disconnect between the broader economy and Wall Street. Despite much better than expected jobs data released last Friday, the US unemployment rate is still above 13%. Equity markets seem to be looking past the current numbers towards a powerful rebound in 2021. There is also the view that momentum will escalate the jobs data exponentially over the next two months.

There is a major chasm among economists as to how quickly the economy will recover. Consumer behavior is a wildcard. How long, for example, will it take for consumers to get comfortable flying or vacationing on a cruise ship?

Wall number two is the potential for a second wave of the coronavirus in the fall. The twin forces at play here are: 1) severity of the second wave; and 2) whether a vaccine will be readily available by the end of the year.

I note recent comments from respected infectious disease expert Dr. Anthony Fauci that COVID-19 is his worst nightmare. According to Fox News he opined that ‘we are surrounded by a world of uncertainty as to how the virus spreads and impacts the body.’ Adding that ‘COVID-19 is much more complex that HIV’, a virus he spent his career studying, because of the varying levels of seriousness in infections — from asymptomatic carriers to patients who develop fatal conditions.

If that were not enough, the world is witnessing massive protests that are raising the profile of Black Lives Matter with the end goal of assuaging police brutality. Protestors have a strong message, but the lack of social distancing is fertile ground for super spreaders. Whether this leads to spikes in the number of COVID-19 cases remains to be seen, but it is clearly a concern. The nightmare scenario would see another shutdown in the US economy, although that likelihood seems remote.

Financial markets did take some solace from Fauci’s upbeat conclusion that while vaccines are the only viable end game, an antidote should be available by the end of the year or the first quarter of 2021. Interestingly, the optimism surrounding a potential vaccine varies among experts. And even under the most optimistic scenario it is unlikely that the economic recovery will come as quickly as the stock market is predicting.

The latest economic update from the Organization of Economic Cooperation and Development (OECD) marked a dramatic shift from its March 2020 outlook. The June 2020 report dramatically downgraded growth expectations offering two equally plausible scenarios: 1) the virus is contained; and 2) a second wave is unleashed in the fall. 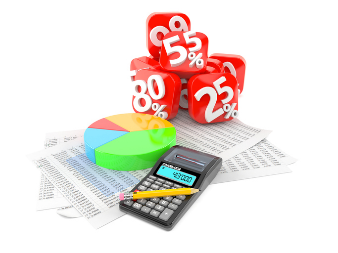 The concern according OECD chief economist Laurence Boone, is that “both scenarios are sobering, as economic activity does not and cannot return to normal under these circumstances. By the end of 2021, the loss of income exceeds that of any previous recession over the last 100 years outside wartime, with dire and long-lasting consequences for people, firms and governments.”

Stark words from the world’s major international economic thinktank flanked by a prediction that global economies would contract by 5.2% this year and possibly as much as 7% should a second wave disrupt activity in the fourth quarter. A “rebound will not be dynamic enough for output to attain pre-COVID-19 levels by the end of 2021 under either scenario,” the OECD warned.

The U.S. Federal Reserve (FED) echoed many of the OECD conclusions when FED Chair Jerome Powell forecast a much slower recovery than financial markets were anticipating. The FED’s strategy is to maintain interest rates at or near zero through 2022 and possibly introducing measures to manage the U.S. yield curve.

Yield curve management means that the FED would purchase long duration bonds to prevent an upward spike in mortgage rates. This would be a shift from the FED normal strategy of managing rates through interventions at the short end of the curve.

This idea that the FED may engage in this new strategy was particularly distressing to the banking industry whose profits hinge on the gap between short term rates (where banks typically borrow) and long-term rates (which determines the rate on the bank’s loan portfolio).

Wall number three is the deteriorating relationship between the world’s two largest economies. Global supply chains will undergo structural change as industries re-price the value proposition of lower labor costs versus supply disruptions. The impact of this risk is not as severe, but it does represent a marked change in business logistics.

Wall number four is the November presidential election. President Trump is business friendly despite lacking leadership qualities. He is unable or unwilling to unite the country which, if re-elected, means that we will witness another four years of chaos.

The Democrats have their own problems and continue to look like the gang who cannot shoot straight. A Biden Presidency would lead to higher corporate taxes and he is not beyond mining political capital by attacking public companies (i.e. Amazon) with 30-second sound bites. And if he chooses the presumed front runner Elizabeth Warren as his running mate, well… all bets are off!

On the positive side – think of this as a ladder used to climb the wall of worry – we cannot ignore the massive stimulus programs including: 1) accommodative monetary policy from global central banks; and 2) fiscal incentives from governments. And there here lies that challenge of predicting bull versus bear trends. 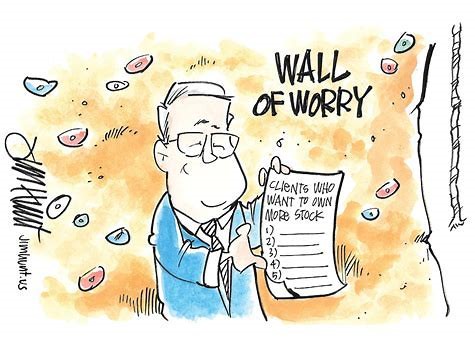 There is no historical precedent for the stimulus that is awash in the system. We need to be aware of “don’t-fight-the-Fed” mentality which, as mentioned, is extremely accommodative. More to the point, interest rates are a key driver in valuing equities relative to fixed income alternatives. Specifically, the relationship between the S&P 500 index earnings yield versus the yield on U.S. Ten Year Treasury bonds.

To calculate that relationship, analysts examine the Bond Equity Earnings-Yield Ratio (BEER) which is calculated by dividing the earnings yield on the S&P 500 composite index by the yield on ten-year US Treasury bonds. The S&P 500 earnings yield is simply the inverse of the price-to-earnings (P/E) ratio.

Analysts often feel that BEER ratios greater than 1 imply that equity markets are overvalued, while numbers less than 1 mean they are undervalued, or that prevailing bond yields are not adequately pricing risk. If the BEER is above normal levels, the assumption is that the price of stocks will decrease, thus, lowering the BEER.

For example, assume with the S&P 500 index at 3200, twelve-month forward earnings for the 500 companies was US $145. The earnings yield is calculated by dividing expected earnings by the current value for the S&P 500 index (i.e. 145 / 3200 = 4.53%). The earnings yield is quoted as a percentage, which measures the percentage of each dollar invested that was earned by a company, sector, or the whole market during the past twelve months.

A comparison of the yield on long-term government debt and the average yield on a broadly diversified equity index can be used as a form of indicator on when to buy stocks. If the ratio is above 1.0 the stock market is said to be overvalued; a reading of less than 1.0 indicates the stock market is undervalued.

According to Investopedia, the theory behind the ratio is that if stocks are yielding more than bonds, that is, BEER < 1, then stocks are cheap given that more value is being created by investing in equities. As investors increase their demand for stocks, prices increase, causing P/E ratios to increase. As P/E ratios increase, earnings yield decreases, bringing it more in line with bond yields.

Conversely, if the earnings yield on stocks is less than the yield on Treasury bonds (BEER > 1), proceeds from the sale of stocks are reinvested in bonds. This results in a decreased P/E ratio and increased earnings yield. Theoretically, a BEER of 1 would indicate equal levels of perceived risk in the bond market and the stock market.

At present the yield on ten-year US Treasury bonds is 0.66% compared with the earnings yield on the S&P 500 composite index of 4.48%. If we work through the BEER calculation the result implies an undervalued stock market. In fact, BEER is at the lowest level we have seen in the last twenty years see accompanying chart). 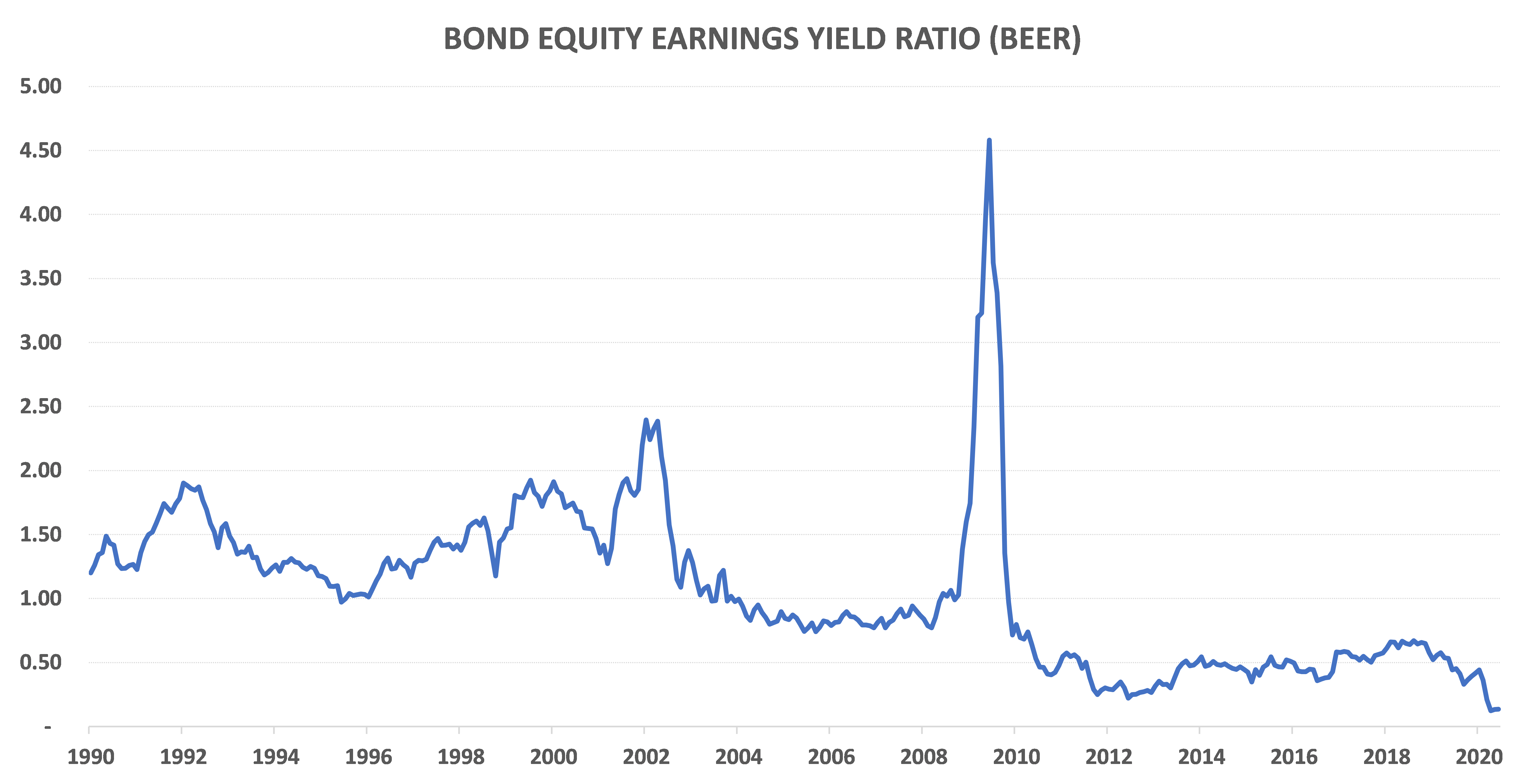 There is much debate about to the value of BEER in the current environment. While we know that interest rates will remain low for the foreseeable future, there is wide consensus on just how much the virus has damaged earnings.

One of our tools given the risks, is to employ a barbell approach to our equity positions. By that I mean dividing the equity component between momentum and value stocks. The momentum collection would include stocks like Amazon, Apple, Microsoft and Netflix. Companies that are positioned well to manage through and benefit from the pandemic. They also have healthy balance sheets which in an ultra-low interest rate environment, means they can access credit markets to buy back shares, increase dividends, or buyout competitors.

The value names would include the banks, drug companies and some industrials. My focus for value plays would be on the banks recognizing that they have room to grow and will benefit as the economy stabilizes. That said, banks will be part of the late stage recovery within the economy, but with their healthy dividends that I believe are safe, you get paid while you wait.