President Trump wanted to re-open the US economy by April 12th because postponing a return to normalcy “could make the cure worse than the disease.” He eventually backed off at the behest advisors. But he was right about the need to strike a balance between the carnage caused by an economic shutdown versus lives lost to the coronavirus.

The sentiment “one life is worth saving at all cost” while considerate, is not a valid principal. And no one really believes it! Every day medical staff in countries overrun by the virus make life and death decisions by assigning probabilities to outcome. As portfolio managers we also assign probabilities to outcomes by assessing the benefits and risks associated with economic triage.

To that point, quantifying this “cure – disease” relationship helps us assign a maximum dollar value to potential government relief packages. Think of this “maximum drawdown” as the demarcation line that if breeched, will cause mitigation efforts to shift from the coronavirus to commercial interests. Which is to say the point at which re-starting the economy will take priority.

THE VALUE OF LIFE

The justice system considers a human life “priceless,” hence the “saving lives at all cost” sentiment. However, the priceless application was designed to prohibit any form of slavery (i.e. humans cannot be bought at any price).

The legal argument neglects the statistical context applied to a broad swath of individuals referred to as the Value of Statistical Life (VSL). VSL is not attached to lives of individuals or used to compare the value of one person’s life relative to another person.

VSL is a mathematical model that calculates the cost of reducing the average number of deaths by one. It is applied across a broad swath of the population and is used to calibrate the cost / benefit of public policy. Public programs that deal with things like safety (i.e. in this case disease control) require base line models to budget spending.

If we assume that fiscal resources are finite[1], there will always be trade-offs when assessing the cost and benefits regarding life-or-death decisions. Modelling trade-offs requires a value to individual life input. Case in point; health care appropriations which must balance the marginal cost of care being administered to the marginal benefits received.

By way of example, a Stanford group lead by professor Stefanos Zenios, calculated the cost-effectiveness of kidney dialysis. His team calculated the value of statistical life (VSL) implied by dialysis at about $129,000 USD per quality-adjusted life year (QALY). “That means that if Medicare paid an additional $129,000 USD to treat a group of patients, on average, group members would get one more quality-adjusted life year.[2]”

TREATMENT IN ECONOMICS AND METHODS OF CALCULATION

There is no standard concept for the value of a specific human life in economics. However, we can look at risk/reward trade-offs that people make regarding their health. Think of the importance we place on our Canadian health system. VSL simply applies mathematical models to quantify the value. In that sense, VSL is very different from the value of an actual life. It is the value placed on changes in the likelihood of death, not the price someone would pay to avoid certain death.

The US Environmental Protection Agency cites the following example. Suppose each person in a sample of 100,000 people were asked how much he or she would be willing to pay for a reduction in their individual risk of dying of 1 in 100,000, or 0.001%, over the next year. Since this reduction in risk would mean that we would expect one fewer death among the sample of 100,000 people over the next year on average, this is sometimes described as “one statistical life saved.”

Now suppose that the average response to this hypothetical question was $100. Then the total dollar amount that the group would be willing to pay to save one statistical life in a year would be $100 per person × 100,000 people, or $10 million. This is a rudimentary example of how economists quantify the “value of a statistical life.”

This again emphasizes that VSL is an estimate of willingness to pay for small reductions in mortality risks rather than how much a human life is worth. The United States government does not have an official value of life threshold, but different values are used in different agencies. In fact, values can vary significantly, because there is no calculation standard.

One approach is summing the total discounted present value of lifetime earnings. The challenge is finding an appropriate discount rate which can have an outsized impact on results. There is also debate about how to adapt models that account for time not spent working (i.e. vacations) and inflation.

Another approach is “contingent valuation” which asks individuals to value an option that they have not chosen or are unable to currently choose. This too has flaws as participants tend to assign different priorities when asked to value something on a standalone basis versus a shared cost basis. For example, how much are you willing to pay for increased safety protocols if part of the cost comes from your base salary.

While we recognize that VSL is a subjective calculation, when applied to large groups it has merit in helping assign a dollar value to a specific program. In this case, calculating how much stimulus might be required to avert economic Armageddon.

We recognize that various government agencies have different metrics for assigning the VSL with varying outcomes.[3] For our purposes, we have chosen to apply USD $8 million to the VSL for the entire US economy. Using that as our baseline we can apply it to the challenges faced with the coronavirus.

The US estimates (Canada has yet to provide this data) that in a worst case, there could be two million fatalities from the coronavirus. The best case puts the number at 100,000 lives lost assuming the general population adheres to protocols issued by the Centers for Disease Control.

The difference between best-and-worst-case scenarios is 1.9 million lives lost. If we apply the USD $8 million baseline to the best / worst case differential, the VSL comes in at USD $15.2 trillion. Assuming a USD $21 trillion economy, the VSL represents about 75% of the value of annual US gross domestic production.

The question is whether Congress is likely to approve that much spending. Much will depend on the trajectory of the virus which may be rolling over[4]. What we know is that Congress has already approved a USD $2 trillion relief package and have committed to a second iteration if needed.

In total, we believe US government agencies have already committed to USD $6 trillion which leaves a short fall of USD $9 trillion in fiscal policy to manage the worst-case scenario.

Trying to decipher the implications of these related programs is at best a challenge. At worst, it is guesswork. However, with what we know from the current batch of relief programs and the likelihood of a second tranche from Congress, we think there will be enough stimulus to backstop the US economy over the next six months.

That timeline sheds light on three possibilities; 1) maintaining the current strategy of selective shutdowns orchestrated by individual States, 2) shutting down the US economy for 30 days in the hopes of eradicating the virus or 3) opening the economy within the next 30 days acknowledging the potential for a worst-case scenario.

Our base case is that the US government will maintain the current strategy of selective State sponsored “stay at home” initiatives re-assessing the impact at 30-day intervals. We doubt the US government will shut down the entire economy (we apply a 15% possibility to that scenario), as it would cast a pall that could lead to economic stagnation. More importantly, a complete quarantine is not possible as essential services including the delivery of food and medical supplies would fall outside any such mandate.

Despite potentially grave consequences, stepping away from the base case and re-opening the economy over the next 30 to 60 days, is a possibility (we assign a 35% probability to that scenario). It is a politically saleable alternative that would reset the economy despite higher mortality rates.

At this point we need to hope for a best-case outcome (100,000 to 200,000 lives lost) where we see a smoothing of the coronavirus trajectory which will allow the economy to re-open in much the same way as China has been doing for the past two weeks.

We also need to be mindful of a worst-case scenario and be able to adapt accordingly.

Wikipedia defines Modern Monetary Theory (MMT) as a macroeconomic theory that describes the practical uses of fiat currency in a public monopoly from the issuing authority, normally the government’s central bank. The value proposition is that unabated increases in the money supply have a beneficial impact on employment.

At present governments have used MMT to deal with serious economic dislocations such as printing money (sometimes referred to as “helicopter money) to manage liquidity threats during the financial crisis, and now as relief packages to mitigate the economic fallout from the coronavirus.

Prior to the rise of MMT during the 2007 – 2009 financial crisis, US money supply increased about 6% per year (see figure 1). MMT advocates believe that money supply is infinite and governments that issue their own currency can pay for goods, services, and financial assets without a need to collect money in the form of taxes or debt issuance in advance of such purchases. They can simply print more money. 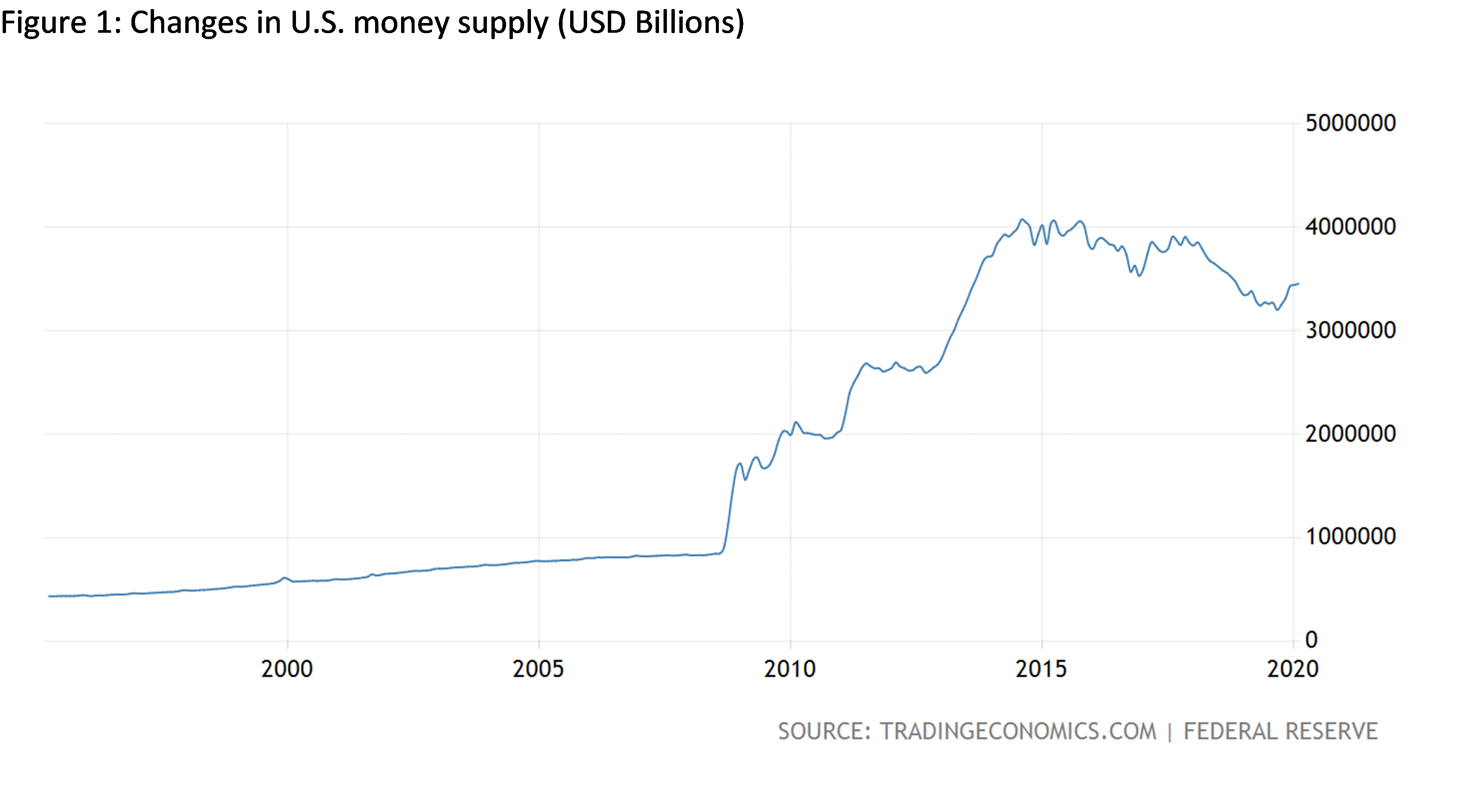 Governments cannot be forced to default on debt denominated in its own currency and the creation of new money is only limited by inflation which is not a problem until economic resources (labor, capital and natural resources) are capped. That generally occurs when the economy has reached full employment.

Let’s accept that the government will print money to manage the coronavirus through various stimulus measures and liquidity infusions by the US Federal Reserve. At some point the coronavirus will abate, the economy will stabilize, and displaced workers will be re-hired. What then?

Following the tenets of MMT, governments will have to shut down the printing press and remove excess capital from the system by raising taxes or issuing new debt. We doubt raising taxes is politically palatable during an election year.

That leaves bond issuance as the other lever to limit inflation. The problem with this approach is that it can negatively impact interest rates. At present, governments are issuing debt at zero interest rates, some at negative rates.

To that point, MMT contends that government “borrowing” is a misnomer. Governments are simply retrieving Treasury IOUs. You cannot borrow your own debt instruments using a currency you control.

MMT also believes that government issued liabilities become financial wealth to the private sector. As such governments can afford to buy anything that is for sale in currency that it issues. There may be constraints like the US debt ceiling law. But as we have seen play out countless times, that is a political constraint not an economic limitation.

The long-term problem as we see it will occur when the economy normalizes and returns to full employment. The need to reduce the money supply through debt issuance will mean that governments will be competing with the private sector for capital.

And there lies the risk… feeding at the trough!

[1] Assigning a finite quotient to the available capital to fund economic dislocations has come under scrutiny in the last couple of years as politicians who believe in Modern Monetary Theory (see section entitled Modern Monetary Theory) believe you can print as much money as required to deal with a situation as long as inflation remains moot.

[4] See video of Dr. Fauci’s briefing at the following website: