The Shape of the Recovery 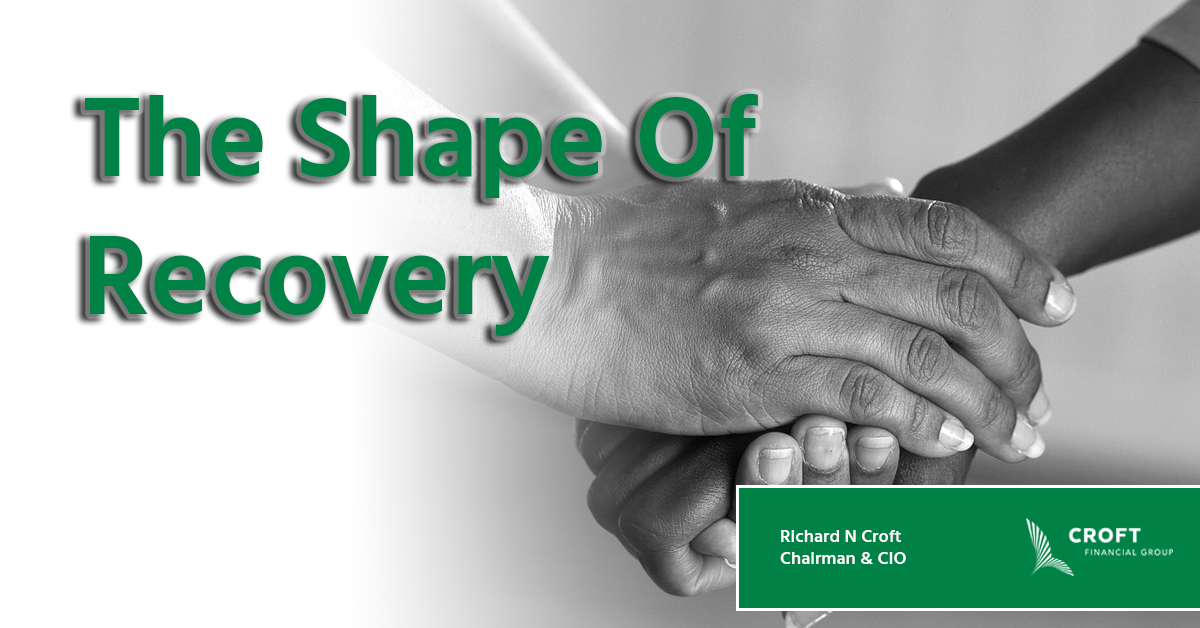 The Shape of the Recovery

Forecasting is about establishing scenarios and assigning probabilities. While difficult at the best of times, developing a rational thesis on the back of COVID-19, is all but impossible. We are confronted with a new virus that has no boundaries and for which epidemiologists have yet to understand its genetic code. As curves flatten around the world, there is concern about a second tsunami in the autumn and the possibility of interim community transmission spikes that could last until 2021.

Governments have attempted to disrupt transmission of the virus with social distancing and stay-at-home orders. The downside is a severing of supply chains, induced coma economies, rampant unemployment and economic contagion that is spreading as fast as the disease itself.

The rapid spread of COVID-19 infections did not seem plausible just six weeks ago. As such, some political leaders believed it would magically go away. The absence of an early response, which would have been more effective and less costly, is something economists and scientists will review and debate for years to come.

What we do know is that COVID-19 transmission has been on an exponential trajectory and efforts to flatten that curve have come at a high cost. What we do not know is whether current stimulus measures will be enough to sustain the economy through potential aftershocks that are, by definition, unpredictable.

Also knowing that we are in a global recession adds little value beyond setting short-term expectations for negative growth. What we need to do is get a handle on the size and scope of the initial shock. Analyzing data from first quarter earnings will help.

Next, we need to calibrate a response depending on the veracity of the aftershocks. Another wave of infections remains a real possibility, meaning that even countries that acted quickly are still at risk every time they nudge their economies back to work. Already, we have seen some resurgence of the virus in Singapore, Hong Kong and China. In that sense, only hindsight will tell us whether their early and aggressive responses paid off.

The latest analysis suggests that COVID-19 will be with us until either the population as a whole has developed a “herd immunity”, developed after at least a 70% infection rate, or there is a successful vaccine. On that latter point, there is some optimism that we could see a viable vaccine by the end of the year. The probabilities we assign to our economic outlook is based to a large extent on the successful development of a vaccine.

To that point, we are assigning probabilities to four recovery patterns: 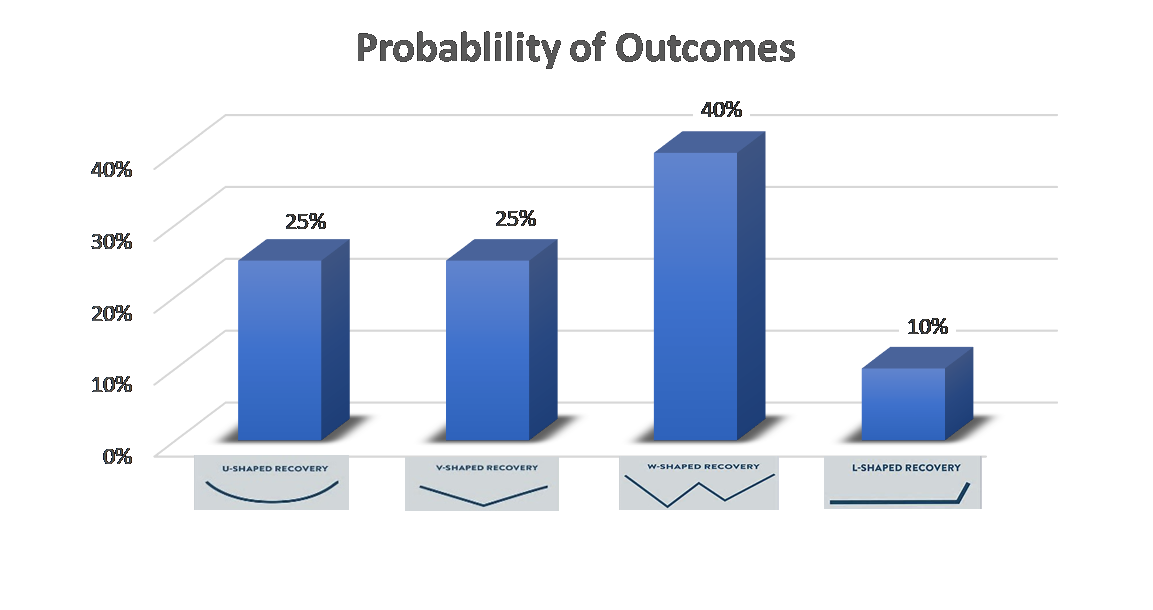 A U-Shaped pattern describes a type of economic recession and recovery that charts a U shape, established when certain metrics, such as employment, GDP and industrial output decline gradually and then in stages, rise over time (typically 12 to 24 months).

Looking at U.S. recessions charted since 1945, approximately half have been described by economists as U-shaped, including the 1973-75 recession and the 1981-82 recession. The most notable U-shaped recessions in U.S. History was the 1973-75 recession (see figure 1). The economy began to shrink in early 1973 and continued to decline or show only slight growth over the next two years, with the GDP dipping by 3.2 percent at its deepest point before finally recovering in 1975. Contributing factors to this recession included the 1973 oil crisis and increased oil prices as well as the 1973-74 stock market crash, one of the worst market downturns in modern history, which affected all the major stock markets in the world.

The recession of 1981-82, which saw a peak unemployment rate of 10.8 percent and GDP trough of 2.7 percent, was largely attributed to tight monetary policies implemented in the U.S. to control inflation carried over from the 1979 energy crisis. For some perspective around the current crisis, U.S. unemployment is expected to peak above 20%. 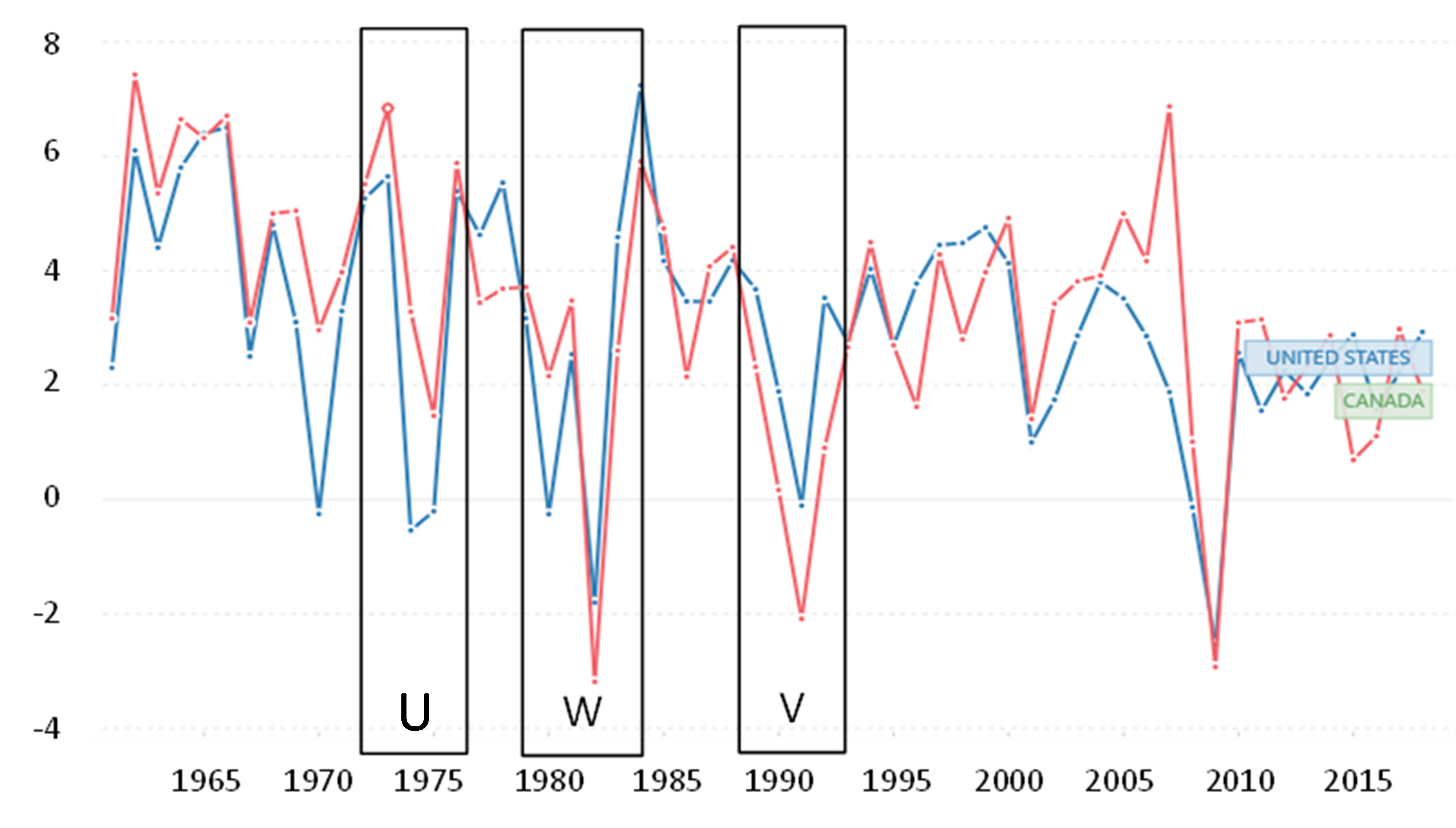 Whether the initial recovery spike follows a V-shape or U-shape pattern will hinge on the size and scope of current stimulus measures. Will the stimulus measures provide consumers with enough disposable income to nurture pent-up demand?

Initially analysts believed that a V-shaped recovery was a best-case outcome and the most likely pattern to emerge. However, as time passes and stay-at-home orders get extended, a V-shape recovery may not be best as it could represent a false start ending with a double dip (see “W-Shaped Recovery).

We have assigned the highest probability to this outcome, which makes it our base case scenario. In our projections, we anticipate a spike in economic activity as stay-at-home orders are lifted. However, the strength of the foundation underpinning that recovery depends on the future trajectory of COVID-19. Our concerns are twofold: 1) will the uptick in the economy be as strong as the market seems is anticipating; and 2) how big is the risk of a new spike in COVID-19 cases?

Given that successful and early flattening of the curve means prevention of exposure to the majority of the population, as well as some reports that COVID-19 survivors have been retesting positive for the virus and speculation that cold weather could increase the virus’s contagiousness, a spike in new cases later this year is not farfetched. If we get intermittent spikes but the initial V wave of economic activity disappoints the market, we could see a retracement as earnings get adjusted downward. Either way, the W-shaped scenario may very well play out.

The L-shaped recessions are worst-case scenarios. It begins with a sharp decline in economic activity followed by stagnation and a slow recovery over a period of years. The most notable example of an L-shaped recession was the great depression that began in 1929 and lasted for ten years.

The recent performance of Greece’s economy would also fit within this pattern. And you could argue that Japan’s lost decade (1990 through 2000) constituted an L-shaped pattern.

Because of massive stimulus programs most economists do not believe a recovery from the current crisis will follow an L-shaped pattern.

As we said, our base case scenario is slanted towards a W-shaped recovery. We have assigned the highest probability to this scenario, which could come sooner rather than later, particularly in terms of its impacts on global financial markets.

We believe there is a real possibility that a major second wave of COVID-19 infection comes at us in the fall. The financial markets tend to be forward looking and may adjust to that scenario as this quarter’s earnings season winds down. In fact, last Friday’s (May 1st, 2020) late week sell-off may be a harbinger of things to come.

To be fair, the damage from Friday’s sell-off may have been the result of serious resistance at the 2900 to 3000 level on the S&P 500 composite index (see SPX chart below). If that turns out to be the case, the sell-off will be short lived.

However, it is possible that equity markets will retest recent lows if earnings from this point forward disappoint. Our view is that the market’s bounce off the March lows was predicated on getting better than expected earnings from the biggest names (i.e. Facebook, Google, Amazon, Netflix and Microsoft). And for the most part, these companies did not disappoint. However, most of the companies reporting from this point forward will have poorer results and less optimism about the future. It is possible the market will recalibrate based on the next wave of results.

Investor sentiment is also a factor. Headline noise which could see the market self-correct if investors underestimate the longer-term effects of COVID-19. That would lead to a spike in option’s risk premium and a downward spiral in stock prices predicated by the fear factor.

With either scenario, we think there is a floor on the S&P 500 composite index at the 2000 to 2100 level. We think there is a real possibility that the Fed would step in at that level with a broad-based stock buying program, and so acting as a sort of “put” to protect the financial markets from further damage. Should that happen, it would be the second V in the W-shaped recovery. 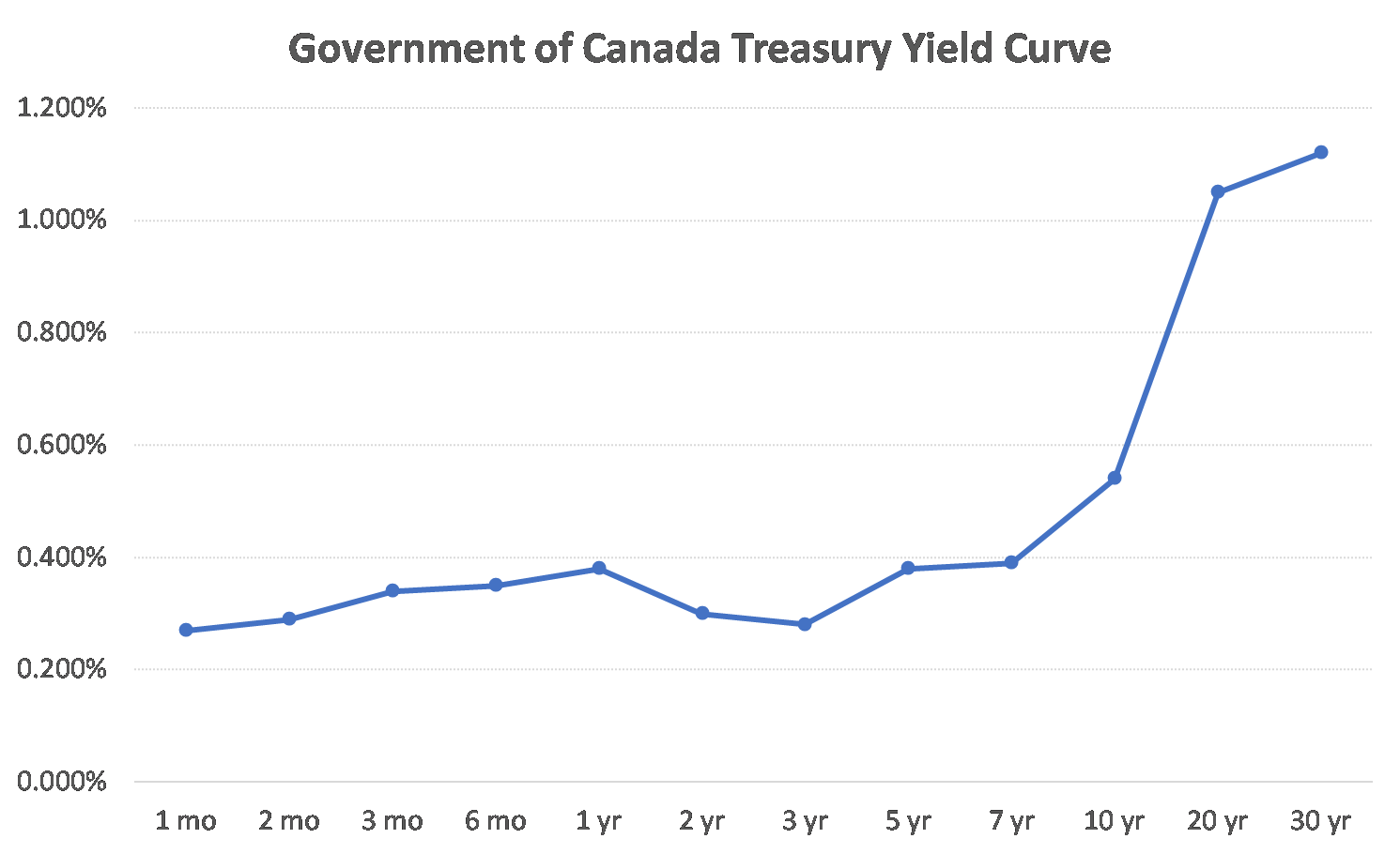 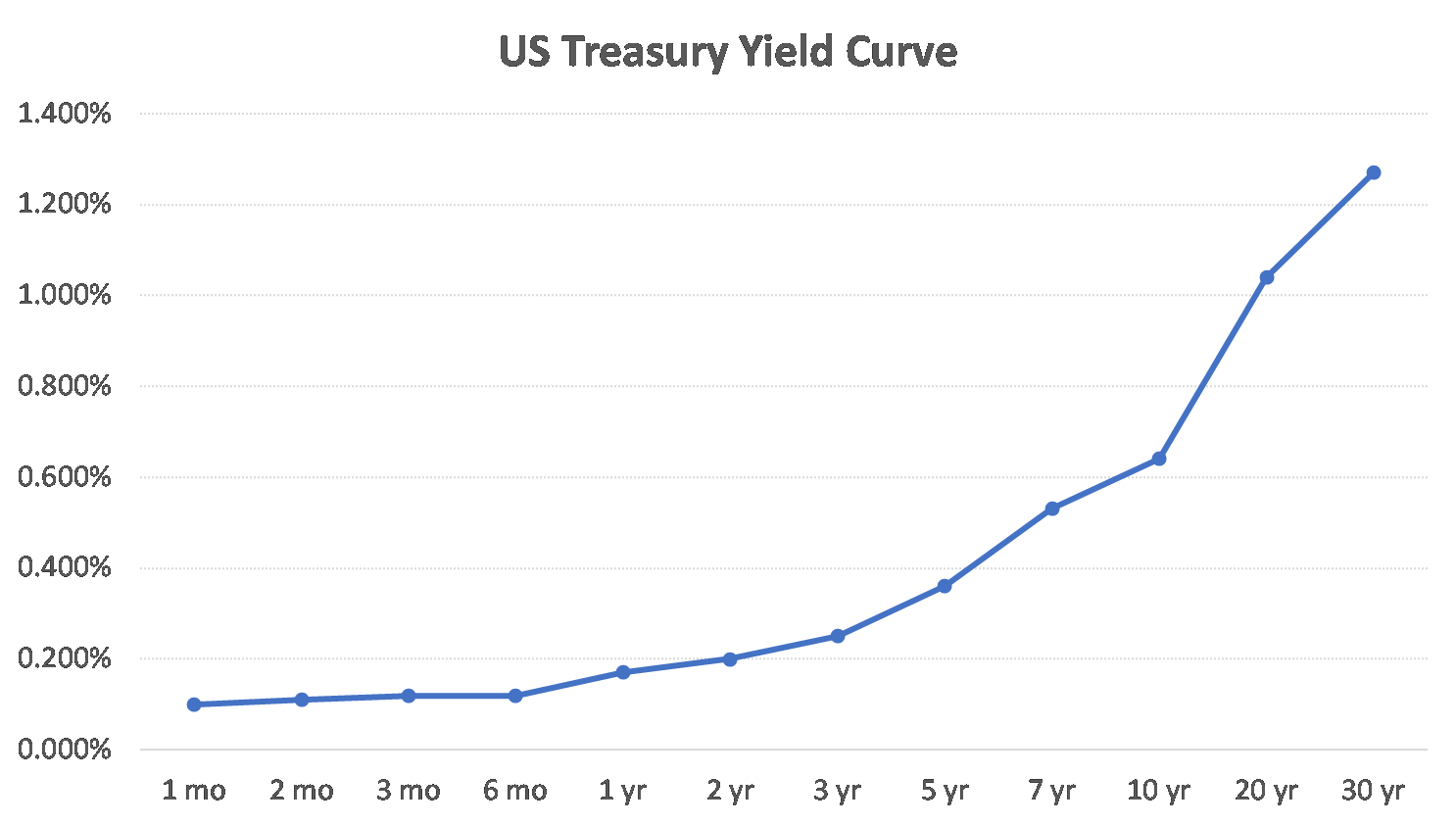 Our general approach is to hold an abundance of cash in our pools employed with other hedging strategies to mitigate some of the potential downside. The other employment of this cash is through our knowledge of options. What we know is that any continued slump in stock prices will push up the Volatility Index (symbol: VIX) which means we will capture more premium from the sale of option contracts (see VIX chart above).

We are also focusing on companies that are likely to benefit from this environment, which include the names just cited. Amazon reported record earnings, albeit below street expectations., and on Microsoft’s conference call CEO Satya Nadella was quick to point out that COVID-19 had only a minimal impact on its very healthy bottom line.

We will continue to avoid segments of the economy where the recovery will most likely follow an L-shaped pattern and associated companies that are not likely to benefit from the most optimistic recovery scenarios: REITs for example, that manage stand-alone or mall-based retail outlets; energy companies that are suffering a major dislocation because of outsized supply and crippled demand; and, of course, the travel and leisure sectors that include airlines and cruise ships that will not see a recovery for a very long time. Despite the best of optimism, in a more drawn-out recovery the difficult financial outlook for many sectors is unlikely to change for the foreseeable future.

On a macro level we believe that ultralow interest rates will remain for years. We can draw some comfort from the fact that North American Treasury yield curves are now upwardly sloping, which is considered a normal pattern. An inverted yield curve (i.e. long-term rates lower than short term rates) is often seen as a precursor to a recession.

Still, bond prices follow an inverted trajectory to interest rates (i.e. bond prices rise when interest rates fall and vice-versa) and, with interest rates near zero, we believe bonds carry great risk. That is not to say we have eliminated bond holdings but rather have reduced our weighting in this category.

High quality preferred shares that we are confident will continue paying their dividend are yielding 6% or more. We think that more than compensates for any perceived risk associated with these instruments.

Longer term, we are concerned about an inflationary spike as a result of massive stimulus injections and ultra-low interest rates. It is possible that inflation will be our next crisis. It may not come for three to five years, but unless central banks de-leverage and governments discover fiscal responsibility after the virus subsides (not likely), it is a real possibility.