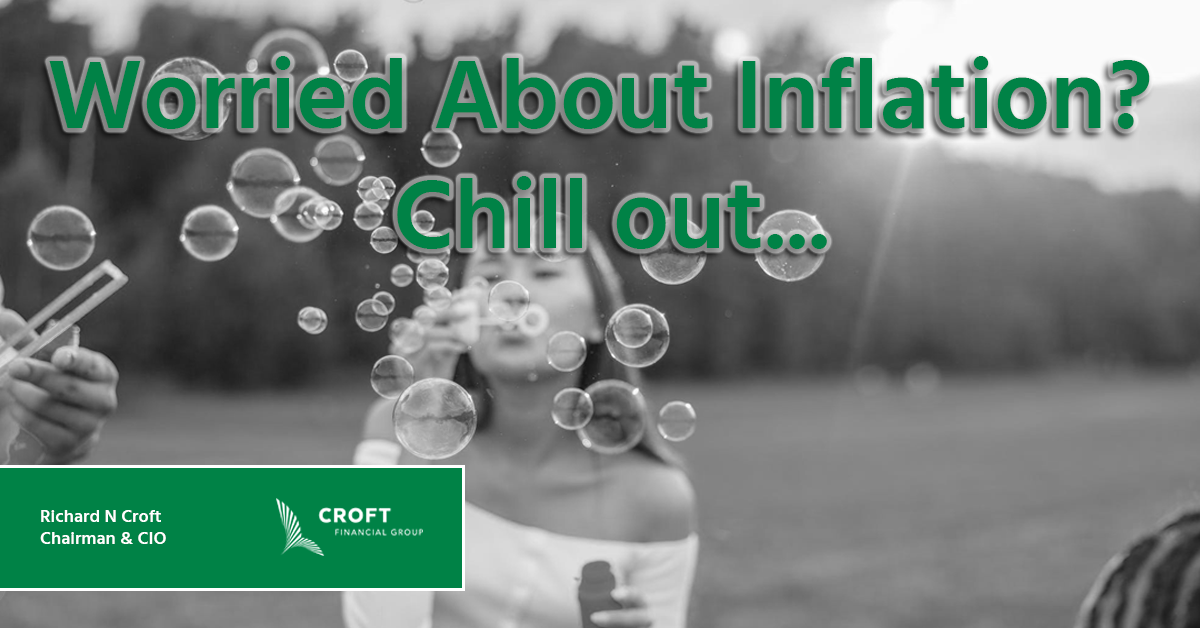 WORRIED ABOUT INFLATION? CHILL OUT…

The latest Canadian data suggests that inflation, on a month-over-month basis, may be abating. Could it be that central bankers are right in the assertion that inflation is transitory? To address concerns that central banks may be ‘behind the curve’, let’s not forget that they employ some of the brightest economists who are constantly sifting through myriad data.

The US Federal Reserve (Fed) employs more than 400 PHD economists. And while some private economists are anxious about rising prices (note the recent upward revisions from Wall and Bay Street) Fed economists believe that inflation will recede in 2022. Based on the October 13th minutes from the Federal Open Market Committee (FOMC), inflation should be under 2% by the end of 2022. That is in line with the FOMC’s long-term target and less than half the current 4.3% run rate.

Of course, predicting aberrations in the economy is like trying to forecast the weather. It is not always right. However, given the number of central bank PHDs examining the data, it is certainly better than a blind guess and should be taken seriously.

Fed officials are also quick to point out that there is a great deal of uncertainty behind the numbers – a position supported by recent history. The inflation forecast from the September 2020 FOMC minutes projected inflation to rise from the 1.3% rate at the time to 1.7% in 2021; well below the actual numbers, and which raised concerns about the accuracy of Fed policy.

Nevertheless, Fed staff forecasts have consistently been better than Wall Street consensus. That’s important because these predictions set the timeline for both tapering and raising interest rates. The rise in consumer prices is the direct result of surging demand and supply chain disruptions. And while the risk is that inflation will be hotter and longer than expected, the prevailing view among central bankers is that prices will decelerate as COVID cases decline and supply chain disruptions abate.

While we believe sub-2% 2022 inflation is plausible, we appreciate just how wide the dispersion is among the confidence intervals. The base case is for 2.2% 2022 inflation, and Wall Street surveys put that number closer to 2.9%.

Increasing concern over inflation is probably why Fed officials broadly agreed last month they should start reducing emergency pandemic support for the economy by yearend. But that does not negate the value of the Fed’s forecasting ability. For one thing the sheer number of Fed economists and the depth and breadth of their data gives them an edge that no broker can provide. The private sector simply does not have access to the same resources.

TOO BIG TO SUCCEED 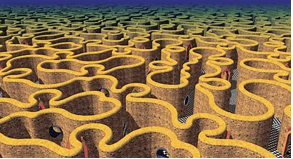 In a perfect world, we spend $45 to get a haircut, the stylist takes the money and gets a manicure for $45, the manicurist buys new earrings… and the beat goes on. The velocity of money impacts the trajectory of the economy, both positively and negatively.

Since we do not live in a perfect world, money flow is subject to friction which reduces the productivity quotient of the impact. The capital that was used to pay for the $45 haircut was after-tax disposable income. The cost of the haircut was subject to a consumption tax (i.e., HST). At each point of the transaction, money is re-directed through the tax system to fund important, but in many cases less productive, expenditures. Think about expenditures for employees who inspect meat plants, issue various licences or deliver emergency services. The key to maintaining a vibrant economy is to ensure that the unproductive friction attached to money velocity does not negatively skew the multiplier effect.

The more involved governments get in the management of an economy the greater the impact of unproductive forces on the multiplier effect. Think about it this way. When politicians talk about raising taxes on income (personal or corporate) and/or consumption (HST) the resulting increase in friction has a marked negative impact on the multiplier effect, which reduces economic activity and can, counterintuitively, result in the increase producing less tax collected overall.

For example, if you add a new tax or hike an existing tax, consumers typically pull back on their expenditures. That slows the velocity of money which curbs the tax collected from each transaction. What often occurs is a reduction in the amount of tax collected despite the application of a higher tax rate. We have never understood why so many politicians fail to grasp the concept that tax revenue is more closely linked to money velocity than to the applied rate.

We bring this up because we can see first-hand the impact excessive government intervention can have on economic growth; something we are seeing play out in China. Global financial markets are focused on contagion fears related to the impending collapse of Evergrande (China’s largest property developer).

Evergrande has more than US $300 billion in liabilities with a number of Chinese banks, and could become China’s biggest financial catastrophe. The company has US $7.4 billion of debt coming due next year and US $689 million in interest payments due before the end of 2022.

In response, China’s Communist Party has offered limited symbolic responses.  China’s central bank has pronounced that the risks are “controllable,” and lenders should keep credit to the real estate sector “stable and orderly.”

The reality is that China is confronting a confluence of rising structural economic headwinds. Stability and order is desired above all things within the context of a very defined political agenda. The Party cannot afford to have anything like Evergrande, or inflation, go off the rails.

Unfortunately, while this is happening China’s Communist Party is promoting a series of draconian measures on their most successful technology companies. These measures are designed to impede privacy controls in social media as part of a strategy that advances the Party’s strategy to weave its way into all facets of Chinese life.

We believe that another goal of these new restrictions is more sinister. The Communist Party is attempting to diminish the role of leaders within the tech community. Capitalist ‘star power’ is not welcome within their communist manifesto.

The result is a marked slowing of China’s growth trajectory. The most recent stats show that the Chinese economy grew at 4.8% in the third quarter, well down from the 18% growth numbers in the first quarter.

In fairness, the quarter-over-quarter slowdown was to be expected given that the numbers at the beginning of the year were being compared to the shutdowns associated with the first quarter of 2020. Still, the latest numbers are indicative of much larger problems implementing China’s policy of common prosperity, which includes having one apartment for each Chinese family.

While admirable, the one size (apartment) fits all philosophy is simply not viable from a broader economic perspective. Just as it did not work with the one child per family mantra in the late 1970s. Because Chinese people preferred to have boys, many girls ended up in orphanages, which then provided babies for adoption in western cultures.

Not only did the one child mantra lead to demographics overweighted in males, but it also slowed population growth to the point that an aging Chinese population is not being replaced by a younger generation.

Reacting to these past mistakes, the Communist Party is now encouraging families to procreate at a faster pace. That approach is doomed to fail as the general population has become comfortable with fewer offspring. You cannot simply turn a demographic ‘population switch’ on and off.

Other problems are emerging as China attempts to gravitate from coal fired power plants to greener energy. During recent shortages, all fossil fuel prices have skyrocketed as China is buying at any cost to prevent blackouts. The longer this continues, the greater the potential global inflationary impact.

While Beijing’s initial draconian edicts chastened China’s corporate elites, they are now hitting ordinary citizens with higher power bills, lost savings and — if the economy continues to struggle — potentially fewer jobs. Look for more pain as the weather cools and energy prices become a bigger hit to the Chinese consumer.

We think the Communist Party will reassess their timeline for the move to green energy, which is being led by President Xi Jinping. We are already seeing a softening of policies that were designed to make the economy less dependent on debt, monopolies and fossil fuels. It is unlikely that President Xi Jinping will want to rock the boat as he sets up for the political gathering in 2023 that will decide whether he becomes leader for life.

COVID is always a concern. The Chinese vaccine has not been as effective as the MRNA versions developed by Pfizer and Moderna, and that means China’s zero-COVID policy is likely not attainable.

These are serious issues when we are talking about the world’s second largest economy and a Chinese leadership increasingly seen as not being able to deal effectively with a crisis. There will be fallout across the globe not the least of, which will be supply chain disruptions for much longer than were originally envisioned.

From an investment perspective, we are keenly aware of the potential effects and are avoiding direct investments in Chinese companies and carefully watching those that rely on Chinese suppliers. Combined with other global supply chain issues, some retailers will be hard pressed to keep shelves stocked during the holidays. This may divert even more business to online shopping with companies that have alternative supply lines and the wherewithal to challenge the status quo.

As an example, Amazon is buying a fleet of refurbished Boeing 777s and Airbus A320s that can fly product non-stop from China to US warehouses, thereby avoiding the backlog at US ports.

Costco and Walmart have pre-booked blocks of containers to manage their supply chains. But other brick and mortar retail may be hard pressed to compete in this environment.

From a global macro-economic perspective, we anticipate supply chain disruptions and the inflationary impact of higher costs for fossil fuels to last longer than originally anticipated. And there is little evidence that things will get any help from the world’s second largest economy. In our view, the Chinese Communist Party is simply too big to succeed.

With risk of prolonged inflation and an increase in interest rates on the horizon, we have shifted much of our equity exposure from growth to quality companies, which will help weather any inflationary pressures that may hit the market. And with the expectation of increased volatility, we have lowered our tech exposure in general but are continuing to implement hedged option strategies in a number of our funds to support both capital preservation and enhanced cash flow generation.

We also continue to use an option writing overlay to meet the ongoing income requirements of clients withdrawing funds monthly. For the fixed income portion of our investment mandates, we have shifted to low duration bonds for now to manage the impact of a rising interest rate environment, which will make longer term bonds a riskier investment. We continue to hold dividend paying securities that can comfortably maintain their current payouts and may, in the best case, periodically raise those distributions.